The A to Z Personal Injury Podcast 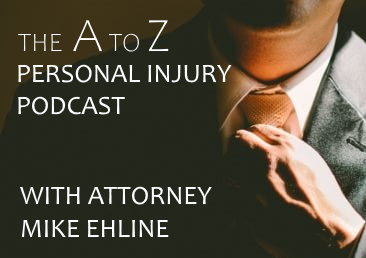 All About Bicycle Accidents

Attorney Michael Ehline gives a brief explanation of bicycle accident cases and how the Ehline Law Firm can help. Victims approach us daily after being run over by cars, buses and trucks. Even after a bad motorcycle wreck, we are here to help the downtrodden, as explained in this excellent podcast. Enjoy our special message from our top notch lawyers.

How Do I Get to Ehline Law from West Hollywood?

West Hollywood actually did not start off as being West Hollywood, but a town called Sherman. Sherman was founded in 1886 by the entrepreneur Moses Hazeltine Sherman. He bought this piece of land with the purpose of connecting Santa Monica and Los Angeles via Pacific and Pasadena railway. Years later, Moses Sherman had developed a small town right beside the rail yard and took on the name of its owner.

As the cinema scene gained more popularity in Hollywood, Sherman experienced a population growth. More and more movie stars and others involved with the film industry flocked here as Sherman’s borders expanded closer to the city of Hollywood. In 1925, the citizens of Sherman decided to change their name to West Hollywood to highlight its close proximity to its famed counterpart.

Is Gambling Legal in West Hollywood?

Under Los Angeles County law, West Hollywood was allowed to gamble. This was the start of the casino and nightclub life that West Hollywood’s “Sunset Strip” is so famous for today.

When Did it Become Incorporated?

During the late seventies and early eighties, the neighboring city of Los Angeles had a series of events that led to West Hollywood declaring themselves as their own city in 1984.

But ultimately, members of the LGBTQ community fled the city to West Hollywood where they could seek refuge from police brutality. In addition, Russian immigrants settled here to escape the Soviet Union. Together, the community of LGBTQ, Russians, and elderly people of West Hollywood voted their town into an official city.

What About Personal Injury Claims in West Hollywood? Is it Safe?

According to the Office of Statewide Health Planning and Development, inpatient discharge data shows that Los Angeles County had 8,471 non fatal brain injuries. These are common injuries in car, motorcycle and bike accidents. And West Hollywood data shows it has some of the most dangerous traffic that exists in Hollywood and the surrounding suburbs. (See also).

Are Males More at Risk for Bicycle Accident Injuries in West Hollywood?

It appears that during year 2017, 158 males were hurt or maimed in LA bicycle accidents. During the same period, 21 females were harmed while riding. (Source: CDPH Vital Statistics Death Statistical Master Files).

Since 1999, the City of West Hollywood has made efforts at damages traffic accident mitigation. For example, they they have operated the Photo Safety Program. The ides behind this is to reduce red-light running and vehicle/pedestrian collisions from red-light violations. (Source; See also Navbug, See also City Data.)

Who Helps Citizens With Accidents in West Hollywood?

Located near the Viper Room, and Whiskey a Go Go, our serious injury law firm is open weekdays from 9:00 am till 5:00 pm Monday through Friday. But always call for an appointment. Most lawyers cannot take walk in traffic. We are often in depositions, or in court. Although the front desk is available to accept mail and answer basic questions, legal advice cannot be dispensed without an appointment. So to make it easy, simply pick up the phone and dial (424) 666-3944.

That way we can arrange a way for you to speak with a real lawyer about your potential legal matters. In some cases, we can arrange transportation for handicapped or economically harmed people to and from our offices. Also, we can even send a lawyer to your home, hospital or workplace locale.

So this is a convenient, central location to many personal injury victims residing or passing through this wonderful town. Also, we offer military and law enforcement discounts.