When I first started law practice as a personal injury lawyer in Los Angeles, I noticed there was a lot of disinformation about Supreme Court Justices, senators, members of Congress, state representatives, and others who became lawyers without law school. Below, I have provided a complete breakdown of famous lawyers who became lawyers without a traditional academic degree from a law school.

Other famous lawyers besides Abraham Lincoln and Clarence Darrow became lawyers without J.D. degrees. For example, John Marshall, Chief Justice of the Supreme Court; Benjamin N. Cardozo, Justice of the Supreme Court; and even Strom Thurmond, U.S. Senator and South Carolina Governor, didn’t possess law degrees. In popular culture, the most famous case of a person with no law degree taking and passing the bar exam is the true story of fraudster “Franke Abagnale, Jr.”

Leonardo DiCaprio played this character in the movie “Catch Me If You Can.” Those familiar will recall that Frank Abagnale forged transcripts from Harvard. He fraudulently took and passed the Louisiana Bar exam using the self-taught approach. He isn’t the only famous case of a person illegally practicing law. The USA and Canada see their fair share.

Here are some more. This article is mainly about becoming a real lawyer without law school, not a fake one. In fact, Benjamin Curtis, appointed in 1851, was the first Supreme Court justice with a J.D. from an American law school. Some of the more famous Americans became lawyers, some with no education or undergrad, most with no law degree, or receiving their law degree later, but legally after obtaining knowledge and skill.

We will break down lawyers who read law into four categories:

1. Americans Who Passed the Bar With No Basic Education Or Law School

ANSWER: Yes, you can, and several Supreme Court and state court justices have done that.

ANSWER: Nope. Check out our below list of famous Americans who became judges, lawyers, and even U.S. presidents, sometimes with zero basic school education. 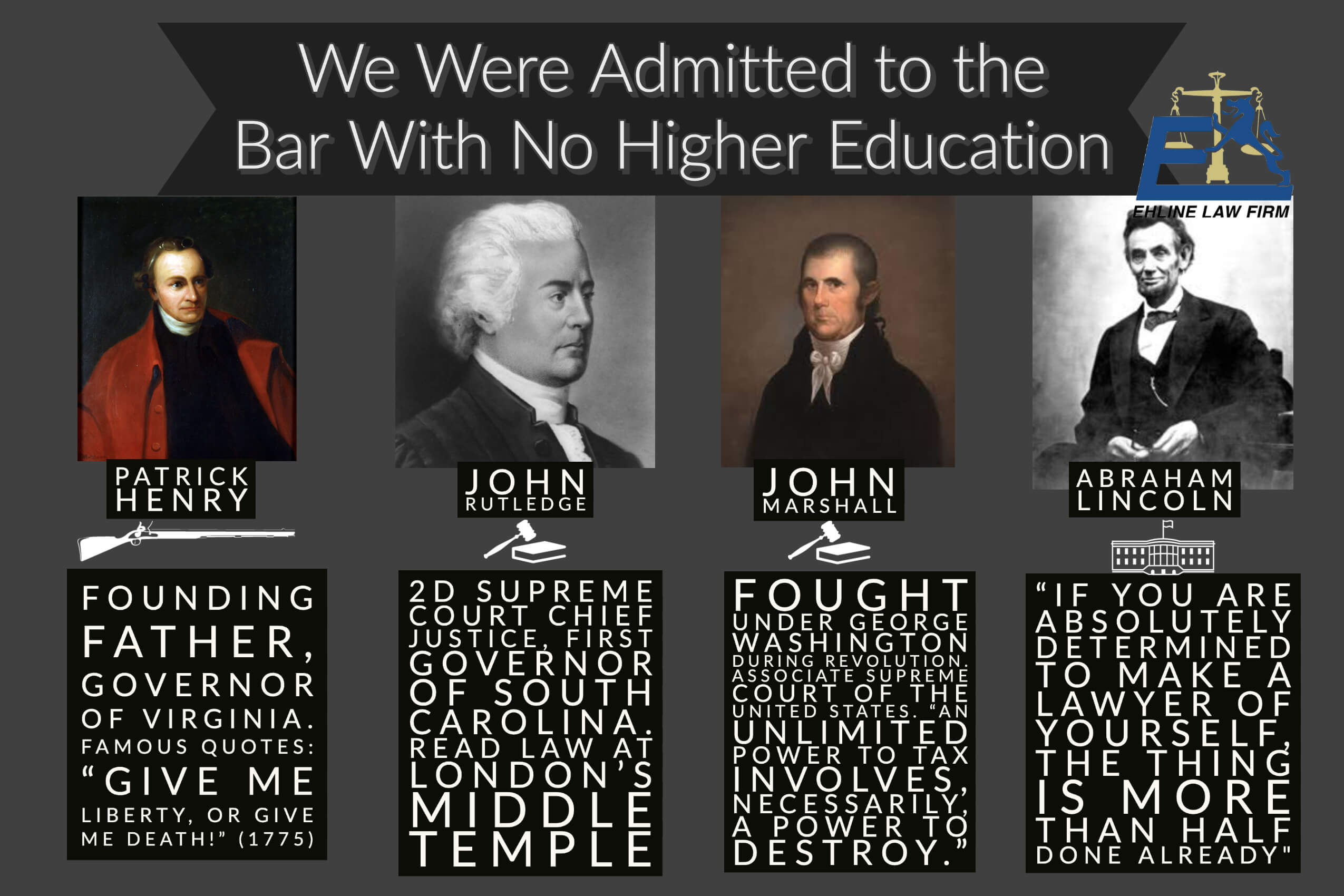 Abe Lincoln Did Not Attend Law School Or Read Law Under a Judge or Lawyer. No. In rural America, students, including Abe Lincoln, often read the law alone. When our prized president, Honest Abraham Lincoln, became a lawyer, he was required to “obtain certificate procured from the court of an Illinois county certifying to the applicant’s good moral character.” This meant an Illinois county court had to stamp their seal, certifying his good, moral character. How that was proved to a court may seem ambiguous today. But back then, our court traditions dictated that good character was shown partly by proving you knew the law and meant to keep it well. (Source).

Typically witnesses, including legal peers, would attest, and a court would allow you to “pass into the bar.” Later, when asked by a young man about becoming a lawyer with no law school, Lincoln retorted: “If you are absolutely determined to make a lawyer of yourself, the thing is more than half done already,”

“It is a small matter whether you read with anyone or not; I did not read with anyone . . . always bear in mind that your own resolution to succeed is more important than any other one thing.” – Abraham Lincoln – 1855 letter. (Source). This American practice evolved primarily through necessity because few trained lawyers existed in several states.

2. Lawyers With Some Education Who Read Law With No Law School

*Credited for thrusting prestige and power into the A.G. public servant position.

*He was the only president in American history to serve two non-consecutive terms in office.

*He was made famous for The Amistad case and his 1833 work, magisterial Commentaries on the United States Constitution. (a cornerstone of early American jurisprudence). He was the youngest justice ever appointed to the Court.

*She paved the way for women’s rights and irreligion.

*Served as an English Colonial lawyer and lawyer in the newly united States of America.

*Key is famous for composing the American national anthem, “The Star-Spangled Banner.”

3. Lawyers With An Undergrad Who Read Law And Passed The Bar 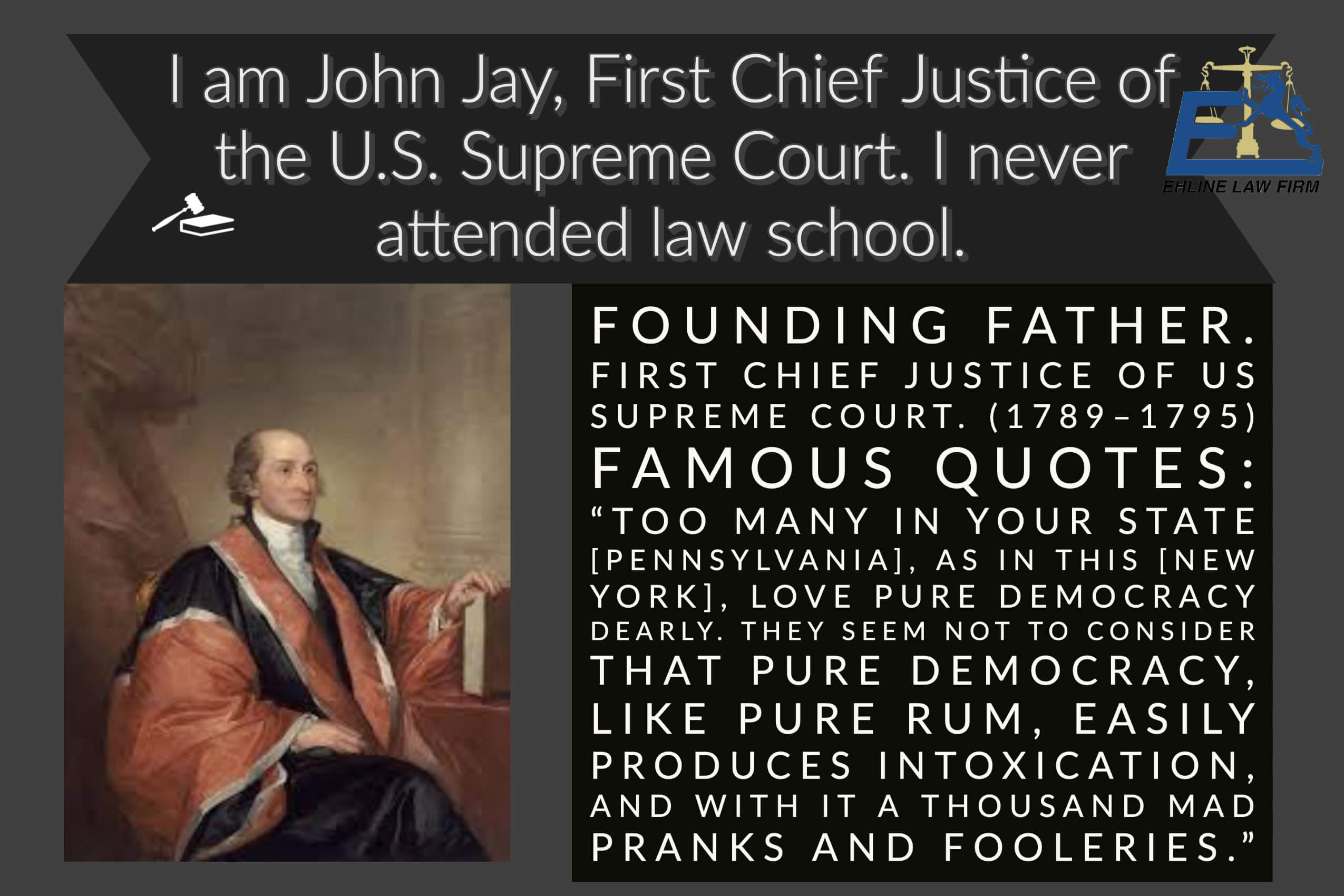 *In addition to being our First Chief Justice, his parents were not British citizens but French Huguenot refugees.

*Chase is one of a handful of U.S. politicians achieving serving in all three branches of the U.S. federal government.

*After Thurmond’s death, reports surfaced he had a 22-year-old mixed-breed daughter with a 16-year-old African American maid employed by his family.

*He was a delegate and Vice President overseeing the Missouri constitutional convention in 1865.

*In 1784, he opened the Litchfield Law School, considered by most historians to be the first law school in the United States.

4. Lawyers Who Attended Some Law School And Read Law

*Apparently, he had had dyslexia since birth, learning to read at age 10.

*Held office in all three branches of the U.S. Government.

*He is best known for formulating the Rule of Reason standard of antitrust law.

*Jackson was also notable for his work as Chief United States Prosecutor at the Nuremberg trials of Nazi war criminals following World War II. Jackson’s reputation for writing remains unparalleled on the Supreme Court. He was true to our founder’s ideals of due process and wished to protect Americans from overreaching federal agencies.

Anciently and during the colonial era, solo law reading was never widely used as a bar entry method. Reading for the law with no supervisor other than books seems to have been made famous in the states due to our need for lawyers, as ours mostly came from England. There was no such thing as a modern classroom either.

Apprentices received legal educations through apprenticing. While we simultaneously grew westward, we badly needed prairie lawyers and had no Inns of Court, reliant on existing lawyers and judges for lawyer training, including independent study.

One major aspect of bar entry was the apprentice learning tact and judicial temperament. Judges would evaluate a candidate’s standing in their community and often interview mentoring attorneys and fellow lawyers who had worked with the bar candidate. The point is professionals in the Bar were best suited to decide moral character, not just legal ability. Both matter!

If you have additional information or know of someone famous who became a lawyer without law school or college, contact us, and we’ll add it to the most comprehensive list of becoming a lawyer with no law school.