Alcohol and Cancer – What Consumers Must Know 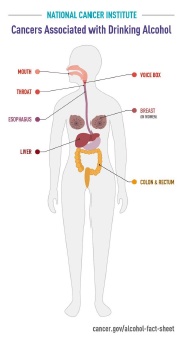 The scientific journal Cancer Epidemiology recently published a study online following alcohol’s cancer relationship. In all 50 states of the US, researchers saw a strong correlation between moderate to heavy alcohol consumption and an increased risk of cancer-related cases and deaths. Between 2013-2016, 4.8% of cancer cases (75,200 cases) and 3.2% of cancer deaths (19,000 deaths) arose from alcohol consumption.

The types of cancer a person may suffer may vary, but consuming alcohol at all increases cancer risks across the board. Under our current government health care programs, the incidence of alcohol-related remains at epidemic levels. Organizations like Ehline Law Firm, the International Agency for Research on Cancer, and CDC are spearheading educational efforts to avoid the cancer risk burden to hospitals and families.

Yes, you can damage your DNA by drinking alcohol! Once inside your body, alcohol can be converted into acetaldehyde, a chemical that can damage the DNA inside cells and linked lab animal cancers. Animal studies show that alcohol intake, and not the amount of alcohol itself, will have differing carcinogen effects on different subsets of beings. When you consume alcoholic drinks at all, especially females, estrogen levels and testosterone levels alter. Human emotions, including sex drive, are connected to our hormones, particularly depression, raising public health concerns.

Winos and merchants selling wine have long touted that red wine is good for heart-health. But the Lancet Study refutes these claims, asserting cancer development risks canceled out any alleged heart benefits. Non-drinkers with heart problems should not ignore scientists having isolated the beneficial red wine components as a nutritional supplement called: Resveratrol. Reservatrol is an antioxidant-like compound common in certain nuts, berries, and yes, red wine.

According to the U.S. Department of Health and Human Services (HHS), people wishing to help their heart should consider more physical activity and dietary supplementation. A great body and mind do not come in a bottle; if so, everyone would be a supermodel.

According to the World Cancer Research Fund, Alcohol and cancer risk rates were highest in New England and the West Coast area, where alcohol use is higher than in other locations. Delaware had 6.7% of cancer cases and 4.5% related deaths. According to the American Cancer Society, the rates of cancer and deaths via alcohol were lowest in Midwestern and Southern states such as Utah (Mormon doctrine prohibits consuming alcohol) with a measly 2.9% of cancer case risk factors 1.9% of related deaths.

The National Cancer Institute states that consuming alcohol/ethanol, whether daily, binging basis, or drinking moderate alcohol occasionally, will increase your risk for suffering different cancers. The most common cancer diagnosis is associated with gastrointestinal tract carcinogens. This association includes the risk of cancers of the mouth, pharynx, larynx, liver (not in the gastrointestinal tract), esophagus, colon (colorectal cancer), and rectal.

A person’s increased risk for suffering esophageal cancer or “esophageal squamous cell carcinoma” contrasted with non-drinkers might vary from 1.3-fold increased cancer risk for light drinkers up to around 5-fold higher for heavy drinkers. Also, people like Asians, who have genetic deficiencies producing particular alcohol metabolizing enzymes, remain at “substantially increased risks” for contracting esophageal squamous cell carcinoma when they drink alcohol. (Any amount of alcohol!)

Although heavy drinking makes matters worse, especially for liver cancer risks, meta-analysis indicates that risk of breast cancer, rectum, science has no clear understanding of every potential mechanism of the body, transforming alcohol into a co-carcinogen et al. alcohol. We do know that poor nutrition plays a role in cancer development and spread. We also understand that even moderate alcohol consumption blocks your body’s nutrient absorption, including vitamin A and nutrients containing vitamin B complex, including folate.

We also have found smokers; drinkers have a reduced vitamin C, vitamin D, vitamin E, and carotenoid absorption rate. You can ask your doctor to evaluate carcinogenic risks, including nutritional supplementation, if reading this article gave you food for thought.

In the CDC and cohort study, it was typically men that were more affected compared to women. However, alcohol was a notable attribute to breast cancer in women as well.  Statistics show that more men consume alcohol and are heavy drinkers when compared to their more moderate drinking female counterparts. However, both men and women experience dose-response-related cardiovascular problems from the effects of alcohol.

Dr. Farhad Islami, a cancer research director for the American Cancer Society, states the study is “important for prioritizing state-level cancer prevention and control efforts to reduce alcohol consumption and the burden of alcohol-related cancers.” Islami wants to raise further awareness of the risks of drinking alcohol and recommends staying away from consumption as much as possible.

In closing, if you are suffering cancer symptoms or remain unsure, consult your physician and stop drinking and get yourself to the gym. To learn more about cancer risks and avoidance, join us at the Paul Ehline Ride Against Cancer each year, sponsored by Leathernecks Motorcycle Clubs and Ehline Law Firm Personal Injury Attorneys, APLC throughout the United States.

International Agency for Research on Cancer. IARC Monographs on the Evaluation of Carcinogenic Risks to Humans. Volume 96: Alcohol Consumption and Ethyl Carbamate. 2010