Apple Watts is reportedly in very critical condition with a fractured skull and major injuries. Her current situation is a matter of life and death. The former Hollywood star has been involved in a car accident, and the reports have confirmed it took place on Wednesday. The information has revealed that the accident was so severe that it left Apple Watts unconscious. Even now, Watts is in intensive care and hasn’t regained consciousness. 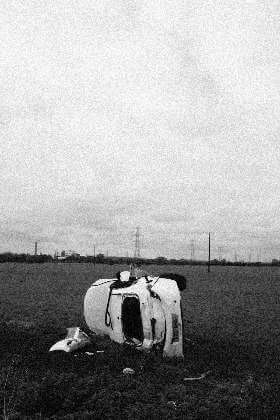 The actress is in critical condition after her car flipped multiple times. Learn about the Love and Hip star Apple Watt’s vehicle ejection, shattered arm, and other major injuries and coma from the car accident. Apple Watts is a Hollywood celebrity and is mainly known for her work in the “Love & Hip Hop: Hollywood” show. Born as Jonelle Lafaye Watts, Ms. Apple Watts started with Love & Hip Hop, beginning with season 5 in 2018.

Before this, the music industry reality star had been featured in several music videos with rap star Chris Brown. As a child, Watts had spent many years in the foster care system. Ultimately, she worked as an exotic dancer before getting her gig at VH-1 becoming a music industry staple.

According to the witnesses, the accident was so severe that Apple Watts got ejected from her car after the car flipped multiple times, leaving her with a broken arm, shattered spine, and other major injuries.

I am an award-winning Los Angeles car accident attorney, Michael Ehline. Below I will discuss the facts of this case and what you can do if you suffer a similar fate while navigating the roads to recover maximum financial compensation.

Apple Watts’ sister, Dominique Flournoy, had confirmed that her sister was traveling from one city to another when the incident happened. She was on her way to Las Vegas from Los Angeles when her car hit a diesel truck. According to Dominique Flournoy, her car ended up crashing during the collision.

But before stopping, Apple Watts’ car went through multiple flips. The flipping made the accident even worse as she flew through the window, evading the vehicle during the rollover accident. Watts drove north on the I-15 partway between Los Angeles and Las Vegas. At some point,  her Mercedes made contact with a Ford F-250 pickup truck which caused her Benz to flip multiple times.

She was pulled to safety by a passenger in the F-250 pickup truck just before her car was engulfed in flames. Watts, unconscious, was air-lifted to University Medical Center in Las Vegas. The California Highway Patrol (CHP) says Watts suffered “major injuries.”

Were Alcohol or Drugs the Reason Behind the Accident?

For now, there is no confirmation about Apple Watts being under the influence of alcohol or any drug. The matter is being investigated, and it is yet to be confirmed if there were any traces of a high quantity of alcohol or drugs in Apple’s body. However, Apple’s sister has confirmed that she was not intoxicated at all. Otherwise, the paramedics or the doctors would have highlighted that.

Even now, Watts is unresponsive, and the doctors have also shared information about the internal damage that the accident has caused her. The report says Watts has a shattered arm, a broken spine, and a fractured skull. One of the closest members of Watts’ family has also shared the post-recovery possibilities that the doctors have laid out about Watts’ physical condition.

The paramedics had confirmed that Apple Watts’ vehicle had caught fire and was still burning when they arrived at the scene. They quickly responded and saved her from the burning car before flying her off to the nearest hospital in Nevada. They also added in their report that the victim had suffered major injuries from the accident.

Who Is At Fault?

The facts are unclear, but typically manufacturing defects can lead to a product liability lawsuit against a vehicle manufacturer. So that is a possibility. But it’s also possible that another driver caused Watt to take evasive action by failing to abide by a reasonable duty of care to keep Watts safe on the roadway. Next, Watts herself could be liable, which could be the basis of her Uninsured or Underinsured motorist insurance to bar her from coverage altogether.

Can you think of some other parties, like the government or even Caltrans, that could be liable for negligent road repairs or negligent failure to repair in a timely fashion? We want to hear your theories.

How did Watts’ Fans React?

When it was announced that Watts ran into an accident, her fans were quick to share their shock. Watts’ Twitter and other social media accounts were flooded with fans’ comments giving well-wishes to her and prayers for her fast recovery.

Watts has built herself a strong and loyal Love & Hip Hop fan base from her participation and phenomenal performance in season 5 and season 6 of L&HH: Hollywood. The docu-soap franchise is famous for sharing rising stars’ struggles and hard work.

L&HH: Hollywood shows how the upcoming stars struggle to bring their life on a successful track. For Apple Watts, the show aired around her hard work and the struggle she had to make to switch her career from dancing to music, including her Love & Hip Hop gig. Ever since the reports of her accident, her Love & Hip Hop fans have been very supportive and have made many motivating comments. Many Love, Hip Hop fans have shared complete confidence in Watts’ ability to fight her injuries and make a strong comeback.

Many fans wish her a fast recovery from the injuries and for her being in another season of L&HH: Hollywood. Based on the California Highway Patrol reports about the initial car crash with the pickup truck, this does not seem likely she will be making music videos anytime soon. Hopefully, the University Medical Center will update her sister, Dominique Flournoy, so that we can learn more from her about the major injuries from this horrific car accident.

Did You Suffer a Celebrity Car Accident with a Diesel Truck?

Did you or a close loved one suffer severe injuries like a shattered arm, fractured skull, or brain injury during a Los Angeles pickup truck accident? Maybe you are not a Love, Hip Hop reality star in a car accident like Apple Watts. But still, your life matters to our compassionate car accident attorneys in Los Angeles.

Please speak with one of our superior personal injury attorneys 24/7. You can receive your risk-free legal consultation, discuss forming an attorney-client relationship, and learn about obtaining an award of maximum compensation for your troubles.

The call is free, and we handle all injury claims on a contingency fee basis. Call us today at (213) 596-9642. If you have a shattered arm like Apple Watts or cannot come to us, we will send a car accident attorney to you to hear your story and form an attorney-client relationship. Contact us today.