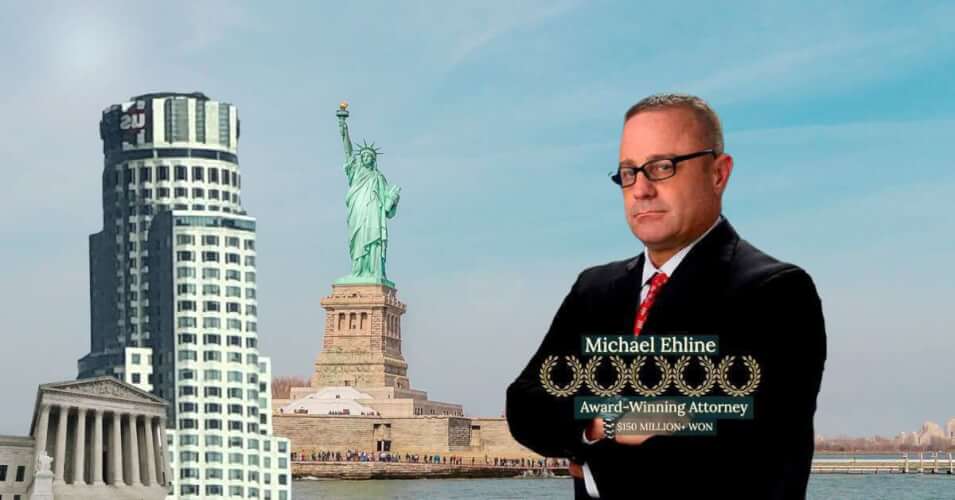 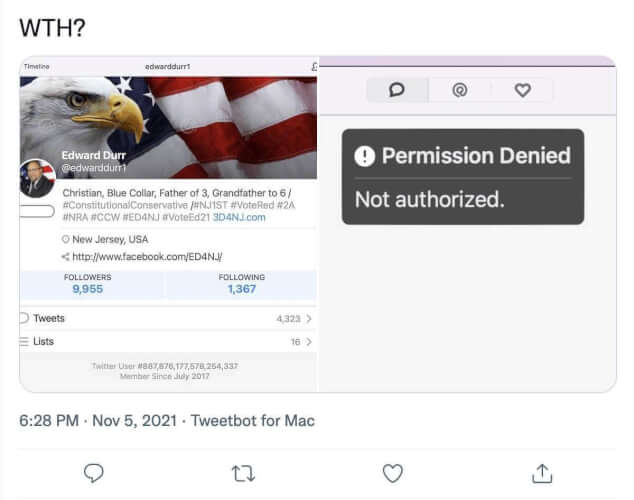 Alas, we reached out to Durr on Twitter, but like most outspoken Trump supporting politicians, Twitter apparently suspended Durr’s account. (See image, left) In September, big rig trucker Edward Durr, the big wheel behind blocking traffic at a key George Washington Bridge access point, was an unlikely big shot. Durr is the antithesis of an excellent eastern progressive, citing “overregulation” and “big government” as the reason for his big New Jersey win. His victory has many pundits asking if over-regulation and clamping down on civil liberties has cost new jersey Dems big.

It’s true that he drove big rigs, and he looks the part: beer gut, big mustache, big red cheeks, almost like a biker or a hessian. He supports limited government and low taxes and calls people who break our immigration laws to come across our unsecured border “criminals.”

He is relevant to our law firm because we handle trucking accident cases. Why he won concerns everyone, not just low-pay blue-collar workers. Truckers are fleeing the shipping business in droves, with many we have interviewed blaming regulatory compliance and forced vaccinations.

Sadly fact-checking has become a political affair, with most fact-check sites supporting democrat political positions, relying upon opinion pieces as authoritative citations, including Snopes. There appear to be two sides to the story here. News media fact-checkers have their version of the truth; the trucking industry and Durr have theirs.

Let’s look at the democrat position:

“As of 2019, more than 3.5 million Americans worked as truck drivers, according to the U.S. Census Bureau, with self-employed truckers making up about 29% of the truck transportation industry. But now, the industry is short tens of thousands of drivers.”

A journalist at USA Today spoke to a college professor and former military officer, Steve F Tracey. Tracey says he hasn’t heard anything about truckers leaving the industry due to vaccine mandates. USA Today has ruled that truckers are not fleeing the sector due to forced jabs.

“Opposition to coronavirus vaccine mandates is not thought to be a contributing factor” to supply chain backups.

American Trucking Association And Durr Say Forcing People To Inject A Vaccine Is A Major Issue With Trucking Industry?

Durr, a trucker and outspoken critic of “totalitarian” and “democrat policies,” was citing these things as reasons for truckers leaving. So perhaps we should take a fresh look? On the heels of what many truckers in Australia and the U.S. call an outright assault on our unalienable rights, a Jersey trucker spent $153. This trucker won over this very matter, “BIG GOVERNMENT.”

So at least this individual will switch jobs rather than comply with what he sees as the Biden Administration’s executive edicts. How a freshly minted political candidate did this has much to do with the rise in shipping accidents and mass retirements.

Many California parents and truckers complain online about mandatory Covid vaccines and law enforcement’s refusal to protect big rig truckers from democrat-supported organizations like ANTIFA and BLM when making deliveries. Additionally, the industry is having trouble with all these rules that stifle the supply chain, leaving many truckers asking if they can run over rioters in self-defense.

Who is telling the truth here?

We won’t put a fact-check label on this because we have seen with our own eyes how trucking-crushing regulations have caused truckers to cut corners so they can place food on the table. According to those who run and work for the trucking industry, we can’t agree with something reported as false when it’s palpably, at least partially true.

What Do Trucking Accident Defendants Say?

This is one of the main excuses they give during deposition testimony, “short on cash.” It’s been getting worse for decades, apparently so much so that truckers lead and are unseating progressives in hard-core welfare cities and states.

Bloomberg goes on to report that “Vaccine requirements could cause trucking companies to lose up to 37% of their drivers to retirements or to smaller carriers that aren’t subject to the rule, the American Trucking Associations has warned.”

They are arguing the vaccine mandate’s value is weak and “will create a workforce crisis for our industry and the communities, families, and businesses we serve.” – Chris Spear, president, and CEO of the American Trucking Association (Letter to the White House seeking an exemption and changes to the Biden “no shot or your fired rule.”)

In one story we reported, even children on Reddit ask whether it’s ok to run over rioters on the freeway with your vehicle to protect your family. Durr’s complaint about this is why on earth are the police allowing lawbreakers with such vulnerability to enter freeways and attack big rig truck drivers?

His retort to anyone saying otherwise is that compared to the few people who walked inside the capital on January 6, years of burning cities and truck drivers beaten by rioters need to end.

Democrats Rage that Durr is Racist For His Support of a Secure Southern Border?

The left has countered and written that Durr is “anti-Muslim” and racist for insisting on documenting the so far, about 2 million Haitians, Central Americans, and other unknown individuals ushered across our southern borders since President Trump’s executive order to make asylum seekers apply in their home countries was repealed by Democrat president Joe Biden.

Durr appears to be angry that “criminals” are being flown and bused into mainly blue voting districts and red states just in time for the next redistricting census. But Durr was not just one of those loudmouths who blows his diesel horn. He put his money where his mouth was, all $153.00, to edge out a big government, anti-Second Amendment rights activist, Steve Sweeney.

New Jersey’s democratic leader, who has been an influential figure in state politics for many years, was defeated by a big, prominent trucking Republican who ran an extremely low-key campaign. The latest incendiary remarks from Durr, 58, on social media include a previous statement. He downplayed the January 6 Capitol uprising, pushed other right-wing conspiracy theories, and referred to all undocumented immigrants as “criminals,” among other things.

The special election in New Jersey’s 11th district has been called for Sweeney, who lost to Edward Durr, a Republican. Over 99 percent of counties have reported, yet the A.P. is holding off on calling the race because it leans left.

Sweeney has been a member of the state Senate since 2002 and has served as its president for the past 11 years. It is thought “Sweeney could be a shoo-in for a college professor or public school teacher with his background.

So at least he won’t have a hard time finding a new job”, says Chera Guevera, a devoted communist, presently living on food stamps, living with her elderly mother in Section 8 housing.

She is concerned she may have to get a job if Durr cuts welfare. She believes work is racist and that working is a form of being exploited by “systemic racism.”

Conversely, a newly retired U.S. Marine, Jim Roan, says he is “still moving to Texas” because “my body, my choice.” This position is the battlefield of this unique election bid.

In his 2017 reelection bid, Sweeney ran the most costly legislative campaign in American history, shelling out $18.7 million. He won that race with 59 percent of the vote. Again, Durr is a truck driver who spent just $153 on his campaign.

Durr spent about $66.64 on Dunkin Donuts and the rest on fliers and business cards for this campaign. He had already collected more than $10,000 in donations.

“I joked with people, and I said, ‘I’m going to shock the world, I’m going to beat this man,'” according to an earlier story in NJ.com.

Durr is More Confused Than His Democrat Opposition?

“I was saying it but joking. Because what chance did a person like me stand against this man? He’s the second-most powerful person in New Jersey.”

Sweeney’s ouster as senate president was a stunning vote of no confidence from voters who are wary of the Democratic clique in their state, fueled by his political might and support of “mentally ill homeless” people and rioters over shopkeepers, blue-collar workers, and truckers.

“I don’t know if I truly am fearless or stupid. Because who in their right mind would take on a person with that kind of power and clout?” Durr asked. “But his power, his clout, did not scare me.”

Candidates with little name recognition are rarely able to take on high-ranking officials, adding another layer of surprise to Durr’s victory.

There is always a lesson to be learned from these events, which is why they are so popular. While having power and money certainly helps, those who concentrate on the community and engage with people by going door-to-door and phoning will have an edge.

Dan Danley, a former campaign adviser to Cory Booker and current television commentator, believes that the incumbent’s message of being an average New Jersey father resonated with voters. He was a genuine outcast who fought the system with humility, and he could now use his new position to assist the underdog in any way possible. Last night’s debacle extends beyond

Phil Murphy, the incumbent New Jersey governor, and Jack Ciattarelli, the Republican challenger who most news outlets have not called for governor’s position, appear to be a more competitive race than expected.

Sidebar – What Will Be the Fate of Truckers After this Election Result?

Virginia Republicans used the president’s unpopularity and local issues like education outside New Jersey to win key statewide posts. Tuesday night was stormy for Democrats going into the next election in 2022. We remain dedicated to honesty and accuracy in all of our reporting. Please use our online contact form if you find something false or untrue.

Will more big-rig truckers and other people opt for politics over vaccinations? Hold on to your 18-wheeler; after the losses in Virginia and New Jersey, democrats may be set to see regulation rollbacks follow as much-needed truckers enter the political arena.

We know the democrat politician was not ready to concede when he mysteriously found over 12,000 ballots after the election. So whether or not the little guy or the establishment wins is still up in the air.

Michael Ehline is a Los Angeles truck accident attorney who helps injured victims in motoring accidents. Michael has lobbied Congress and assisted in drafting crucial traffic safety legislation. Michael can be reached for media inquiries by using our convenient online contact us form. Michael has been helping victims of Port of Long Beach cargo container accidents due to the supply chain fiasco and understaffing at the docks.

Common Loading Ramp Safety Hazards and How to Prevent Accidents