American Citizens can do 9/11 Lawsuits Against Saudi Arabia

The U.S. House of Representatives passed a new law. This law allows American citizens to file death lawsuits against Saudi Arabia. Most of all, this is due to members of the Saudi Royal family orchestrating the 9/11 attacks. However, the Saudi government’s ability to influence our elections with campaign donations is stunning. So it is highly likely that the U.S. president will NOT sign this consumer rights legislation.

Anyways, the Saudis, like ISIS, are a Wahabist Muslim country. So this is the same type of Islam followed by ISIS and Al Qaeda. And many innocent people were killed in the 9-1-1 attacks by Wahhabists. Many of the deaths worldwide due to terrorism were due to Wahhabists. Also, the intent of this Report is not to disparage moderates.

How To Distinguish Shia versus Wahhabist Islam?

Of course, Iran has its Shia version of Islam. Also, it supports a world government dominated by its form of Islam. Both countries have their account of Islam as the official state religion. They have been at War for generations over who has the purest form of Islam. But both support and fund what freedom-loving people call “terrorism” worldwide. Anyone supporting Israel is an enemy of the Saudi royals and the Iranian government. Ironically, many U.S. college campuses are all in for these terror states. Sometimes they will work together to fight a common enemy, like the U.S. However, we are not allies with Iran.

Here we discuss lawsuits against our U.S. ally, Saudi Arabia, for wrongful death. We are not an ally of Iran. So how is it that we are even allied with the Saudis? After all, they want to spread Sharia Law to the U.S., and they appear to have funded terror.

What Is The Role Of CAIR In Disinformation About Sharia Court Goals?

CAIR, a terrorist-dominated organization, helped coined terms like “Islamophobia” to attack anyone who opposes Sharia Law. So Wahhabism is a strict form is Islam similar to that practiced by the founder of Islam, Mohamed. It requires the stoning of women who got raped.

Also, it allows the rape and enslavement of non-Muslims. Of course, this religious system involves the killing of homosexuals. Much is the same way Google is helping Communist China enslave and monitor its citizens; ANTIFA and their allies in the U.S. public school system are helping spread Sharia. If you don’t support it, you are a “racist.”

Furthermore, it uses an Islamic doctrine called “Al-taqiyya.” But this is to deceive “infidels” as to the fundamental goals of Wahhabism. So this allows followers to blend in until their numbers are significant enough to influence the vote. But once they get large enough, they will be able to intimidate natives as they have done in Europe. Of course, this goal is a “caliphate,” or if you prefer, a world ruled by Sharia Law.

Why Do Progressives Support U.S. Indoctrination Of Sharia Law?

Simple. The enemy of my enemy is my friend. The progressive left has been moving full steam to dismantle Christianity in the U.S. Who is the number one enemy of Christians? Many westerners have been indoctrinated in their public schools or by leftist news media that Sharia Law is peaceful. Hence, it will not be above the Constitution. Under mainstream Islamic doctrine, no law can ever be superior to the Quran. All Sharia courts do is use the Quran’s prescribed punishments above and enforce them. Also, non-Muslims are second-class citizens under this Sharia Law system.

Is There A Saudi Connection To The Nazis?

Yes, there is! Sharia Law is the ultimate object of the Saudi Arabia Wahhabists. A statist system like this has been the envy of dictators for generations. Individual members of the Nazi SS followed a similar form of Islam. The Muslim Brotherhood grew from World War II and a Muslim Nazi SS Division. To this day, the PLO does the Nazi Salute. 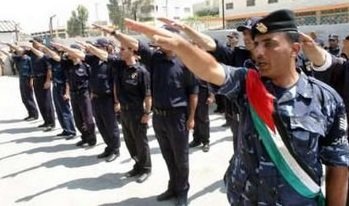 The SS Handschar Division Made Such An impression Upon Hitler That He Wished Germany Had Been Islamic:

‘During a meeting with a delegation of distinguished Arab figures, Hitler learned of how Islam motivated the Umayyad Caliphate during the Islamic invasion of Gaul and was now convinced that “the world would be Mohammedan today” if the Arab regime had successfully taken France during the Battle of Tours, while also suggesting to Speer that “ultimately not Arabs, but Islamized Germans could have stood at the head of this Mohammedan Empire.”

Syrian and Egyptian Islamic fundamentalists also sheltered German war criminals after the War. (Source.) Angela Merkel has moved forward with Hitler’s will by flooding Germany with millions of military-aged males from Syria and other Islamic countries. She is now forcing them into military conscription as part of her multicultural experiment. Rapes by male refugees and attacks against natives not following Sharia Law are at epidemic levels throughout Europe.

Gun laws are so strict in these invaded countries that only terrorists seem to have firearms. Victims have little to no defensive guns. So why would these countries be letting in these scofflaws? After all, they refuse to assimilate, rape their women, and pillage their welfare systems. Follow the money.

Who Are The Biggest Donors To Politicians Who Support Open Borders Besides Communist China And Our Enemies?  Saudi Arabia!

The redacted parts of the 9-1-1- Report showed that the Saudi royals helped Bin Ladin kill Americans on that monumental day. We know that Saudi billionaires and Soros-backed foundations are donating billions to get as many immigrants from Islamic countries into the U.S. as possible. Follow the money. For example, just one Saudi Prince pledged $32 billion to promote Islam/Sharia in America. Also, the Clintons collect millions of dollars in donations from foreign organizations that support global Sharia Law. Saudi Arabia has funded 20% of Hillary Clinton’s presidential campaign.

Tax records submitted by the Clintons show that Bill Clinton was an “honorary chairman” of GEMS Education, a Middle-Eastern-based company whose only goal is to teach and spread sharia law. GEMS paid bill Clinton $2.1 million as they worked with the Clinton Foundation to expand their worldwide schools and teach people that sharia law is the best form of government. The purpose of GEMS’ schools is to “teach all Muslim students the pillars of Islam, Islamic faith and morals, enabling them to apply them to their lives efficiently.”… Foreign governments like Saudi Arabia have donated huge amounts of cash to the Clinton Foundation…”

Justice Against Sponsors Of Terrorism Act (JASTA) For 911 Victims.

So the law passed as House Resolution 3815 is probably a non-starter. The current U.S. president is a big supporter of the Muslim Brotherhood and recipient of donor funds from Soros-backed companies advancing Sharia Law. But the new law would help shed light on the corruption of members of the democrat and republican parties in placing the rights of people hostile to our country over that of our — another reason for its probable veto.

This law is known as the Justice Against Sponsors of Terrorism Act (JASTA). It is a tort attorney’s dream. The law makes an exception to sovereign immunity. This bill allows U.S. citizens to file a lawsuit against foreign governments. Because of acts of terrorism that happen on U.S. soil, killing Americans.

Because fifteen out of nineteen men from Saudi Arabia hijacked commercial airliners, Resolution 3815 passed due to the September 11, 2001, terrorist attacks. You will recall that terrorists used passenger jets as missiles to target the World Trade Center and the Pentagon.

The vote was pushed to happen before the 15th anniversary of the attack this Sunday. Also, legislators in favor of the bill included Peter King, New York (R). Speaker of the House Paul Ryan, Wisconsin (R), approved the bill. Ryan gave permission as long as Judiciary Committee Chairman Bob Goodlatte, Virginia (R), backed the bill.

In the Senate version of the Bill, John Cornyn, Texas (R), and Charles Schumer, New York, (D) proposed the legislation. The bill passed in the Senate in May by 100 to 0 votes. So the House approved the bill Friday with a unanimous vote. But this gives the Republican legislature the votes to override a veto by the President.

As a result, with lobbyists and Democrats, Saudis have tried to block the bill. One of the groups was the Podesta Group.  Co-founding this group was accused of pedophile John Podesta, Hillary Clinton’s campaign manager. John’s brother, Tony Podesta, runs the Podesta Group.

The Right To Sue The Saudis For Wrongful Death Will Likely Be Vetoed?

Due to the incredible power that Muslim extremists now wield de facto control over U.S. politicians, their friends in the press, and U.S. bureaucracy. Thus, it is highly likely the U.S. president will veto this consumer rights legislation. It will blow a lid off of government corruption if it gets signed. Also, it will likely show foreign influence on U.S. elections. Whether the Saudis would ever pay a judgment is also unlikely. After all, they are a sovereign power with no clear duty under the treaty.