Did You Suffer a Los Angeles Bus Accident and Need Advice? 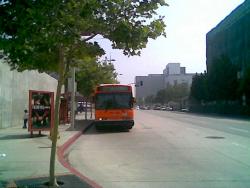 Understanding bus accidents from a legal perspective, involves you getting to know a little bit about personal injury law. According to the Federal Motor Carrier Safety Administration:

In any event, run over by a bus or hurt as a passenger on a bus remains one of the most devastating injuries. Recently, in Redondo Beach, a little girl suffered and died from a hit and run on the Pacific Coast Highway. This occurred when the rearview mirror of and Metro Bus almost tore a little girl to pieces when it struck her head. These little girls were riding bicycles, thinking they were safe. But surveillance footage from the nearby Creative Indulgence building indicates the riders were not safe.

So what exactly is a bus?

A bus (/ˈbʌs/; plural "buses", /ˈbʌsᵻz/, archaically also omnibus, multibus, motorbus, or autobus) is a road vehicle designed to carry many passengers. Buses can have a capacity as high as 300 passengers. The most common type of bus is the single-decker rigid bus, with larger loads carried by double-decker and articulated buses, and smaller loads carried by midibuses and minibuses; coaches are used for longer-distance services. Many types of buses, such as city transit buses and inter-city coaches, charge a fare. Other types, such as elementary or secondary school buses or shuttle buses within a post-secondary education campus do not charge a fare. In many jurisdictions, bus drivers require a special license above and beyond a regular driver's license.

Irrespective of its use, sometimes a driver turns the wheels to the curb and sideswipes people. Others, the operator fails to set the brake. Other times people suffer from a failure in the design, construction, and quality of the public transport vehicle itself.

Buses can also involve road trips, like Casino Tours. These are like tourism gambling excursions for retired folks. So they are not all public city or county-run bus lines. School buses have been in the news a lot too. In most states, seat-belts are not required for children either.

For example, Greyhound coaches and other small charter bus companies all serve specific tasks. They are private, however. So injured passengers and survivors of bus wrecks understand the nuances of the government entities and closely held companies they are pursuing. (Source).

Hence, if you need legal advice over an injury by a bus caused by negligence, a bus accident attorney will help you understand your rights.