Dog Bites Police Officer, and Owner Tries to Save Dog 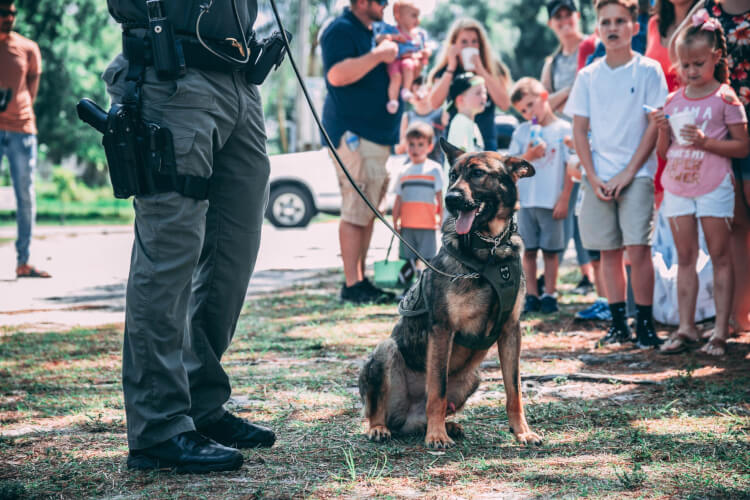 Recently, an Elk Grove resident’s pet dog bit a stranger, forcing animal control to take the dog away for euthanization. The owner pursues all legal options in a bid to save her furry companion. Let’s go over the details of the news release with Ehline Law and our personal injury attorneys.

Dog Bites Two People on Different Occasions, and Owner Decides to Pursue Litigation to save Her Pet

Faryal Kabir, an Elk Grove resident, takes her dog, Zeus, to the park twice a week, but recently things didn’t go as expected, leading to several incidents that would lead animal control and the City to get involved.

Kabir’s Dog, Zeus, Bites a Stranger Twice while Walking on the Sidewalk

On May 16, 2022, Kabir brought her dog back from the park in her SUV and parked her vehicle in her driveway. Zeus jumped from the SUV and lunged at a man walking on the sidewalk, biting the stranger in the back of his right leg. According to the City statement, the dog attacked the victim once more after it tried to move away.

On June 8, 2022, animal control officials arranged a virtual meeting with Kabir to determine whether the dog was dangerous.

After the discussion, the officials concluded that Zeus was a dangerous dog, and they gave Kabir a week to take measures to ensure she complied with the animal control’s requirements.

On June 14, 2022, Kabir reached animal control with evidence of her complying with the requirements, but the officers were not in as the final inspection date was to be June 15, 2022. They told her to go back home.

On June 15, 2022, Kabir was working in downtown Sacramento when her father called her to inform her that animal control was at their home to take the dog away.

She understood nothing she could do at that point and started crying. Kabir went to say her goodbyes by hugging and putting him on the leash, but before she could do that, she jumped at the officer and “bit” him on his knee.

That was the last time Kabir saw her best friend.

The City statement revealed that the officials gave Kabir a week to ensure compliance with animal control’s requirements, but she failed to do so. The statement read Kabir did not have public liability insurance, nor did she own a muzzle or a 3-foot leash, or enrolled her pet in obedience training.

According to the City, the animal was now considered dangerous. Following the law, they impounded Zeus because the dangerous animal attacked a bystander and an officer.

The City statement also mentioned the forcefulness of the dog’s bite, stating that it tore the officer’s uniform and caused him to bleed.

Kabir’s lawyer, Christine Kelly of San Rafael, spoke out about the incident, stating how the law enforcement officers mishandled the incident. Instead of putting a muzzle on the animal, they created a scene at Kabir’s residence, provoking the animal to protect Kabir, resulting in it “nipping” the officer.

Since that day, the animal control caged Zeus at their facility, and Kabir visited multiple times to drop off some toys and treats, but she was not allowed to see the dog. Animal control kept the pet under their custody until the City decided what to do about it. Since then, Kabir started garnering support for her dog and her plea to release the animal.

Mayor of Elk Grove, Bobbie Singh-Allen, finally spoke about the incident in the media stating that Kabir failed to present all the facts causing many to remain critical of the City.

He said he could not further comment as Kabir and her attorney have decided to pursue litigation.

To support Kabir’s claims that the dog is friendly and doesn’t deserve the harsh reaction by the City, Kelly, Kabir’s attorney, reached out to James Crosby, a retired police officer. He oversaw and would report on animal abuse and cruelty investigations.

Crosby provided a declaration, stating that he saw the footage of the animal taking a nip at the officer. According to Crosby, the scene provoked the animal, and the officers have the training to avoid nips. Crosby concluded that both incidents were minor, the officer was liable for the injuries caused, and in his opinion, Zeus is an adoptable dog.

Does Crosby’s Declaration Change Anything for Kabir and Zeus?

In California, animal control can euthanize an animal if it is seriously ill or is a threat to the public, meaning the animal is dangerous. The City deemed the animal unsafe, but Kabir’s attorney received a declaration from an experienced retired police lieutenant stating that Zeus is an adoptable dog.

Under the 1999 state law passed in California, animal shelters should put out treatable and healthy animals for adoption rather than being killed. However, the state never provided any resources for animal shelters to provide for the animals and reduce euthanasia.

In the case of “Dog bites police officer, and the owner tries to save the dog,” resources are not a problem as Kabir has already spent $15,000 of her own money to provide for Zeus. At the same time, he remains at the animal shelter, showing Kabir’s efforts in caring for her furry companion. She also continues to raise money for legal fees through a GoFundMe campaign as a dedicated person who loves dogs.

Recently, running for Governor, Gavin Newsom stated the need for $50 million in funding to help shelters take care of animals and avoid euthanasia. Contra Costa County is an excellent example of how funding can help reduce euthanasia incidents and increase efforts in adopting and neutering a dog.

Another major part of the case is for the attorney to prove that the dog did not bite the police officer but nipped him. There are recorded incidences in the past involving police officers’ interactions with aggressive, dangerous dogs.

For example, on August 25, 2022, in the latest news, a police officer shot a dog in Philadelphia after it viciously attacked a family member and did not let go. Was Zeus’s “bite” vicious and aggressive? Could the police department have handled the issue better without dogs damaging a human body?

And what about the fact that the police department in certain states uses police dogs to exert pain on suspects to ensure compliance? On July 7, 2020, a Yakima police dog bit a man as part of their pain compliance strategy during a traffic stop. Dogs can attack a person who might be a threat while making it home safe at the end of the shift.

The police department supported the idea that using a police dog to bite people is one of the ways to ensure officers’ safety and prevent them from using deadly force, like being shot with a gun by suspected lawbreakers during a crime.

You just heard a story far more common than you may believe. These incidents where police dog bites unarmed civilians expose the growing bureaucracy within the police system. It’s a matter of how well Kabir’s attorney conducts an investigation and handles the litigation.