The Media Won’t Report The Entire George Floyd Story. So Here Is Part

[Page Updated 09/01/2022] Yes, Floyd, a convicted armed robber and felon who pointed a loaded gun at a pregnant crime victim, worked as a bouncer with officer Chauvin at a nightclub in Minneapolis, MN.

Fact Check: Did George Floyd Have Fatal Levels Of Fentanyl And Crystal Meth In His System? Yes. True.

The True Story of What Happened in Minneapolis

Yes, Floyd, a convicted armed robber and felon who pointed a loaded gun at a pregnant crime victim, worked as a bouncer with officer Chauvin at a nightclub in Minneapolis, MN.

As the high Floyd was trying to drive away in a van, the police, an Asian, African American, and Chauvin, detained him for questioning after receiving 9-1-1 reports of a large, muscular man wearing a tank top, speaking illegibly.

The terrified convenience store worker told the 9-1-1 operator that Floyd was trying to purchase goods with a counterfeit $20 bill. The local liquor store worker noted that he seemed like he was high on drugs.

Officers determined it was unsafe to the public for him to drive while high, so the law affected an arrest, enforcing public safety that a man would not drive around and kill people with his van. No one, not even the surviving family, disputes that Floyd was high on a cocktail of drugs or that it would have been unsafe for him to drive. The issue is whether Chauvin (a white male) exceeded the use of force and if so, was it because he is a racist or due to systemic racism?

Chauvin, a skinny, underweight cop [Chauvin weighed around 140 lbs with his tactical gear] who previously worked with Floyd as a bouncer was terrified of Floyd [6 foot 4 inches and well over 200 lbs.]

Chauvin stepped on a resisting Floyd’s throat while Floyd was handcuffed in order to detain him. The law found that Chauvin exceeded the use of reasonable force and threw him in jail.

Afterward, we saw one protest after another, one set of looting after another, and BLM representatives saying, “insurance will pay for it.” City after city was set ablaze, beset by riots and severe disruptions, with the mainstream press crying “peaceful protests”?

Regardless of the position of your civil rights beliefs, much more remains involved in the case surrounding George Floyd’s death than our mainstream media is sharing with you. This disinfo by journalists (“mostly peaceful protests“), hiding the reports of the public safety threat, helped give rise to the massive protests and BLM riots of 2020. What the officer did was wrong. What the media did was wrong too, by presenting only one side of the story and thereby inciting violence based on facts that never existed.

Our civil rights attorney researching the case and its aftermath helped us understand more than was initially shared with the public during May and June 2020. 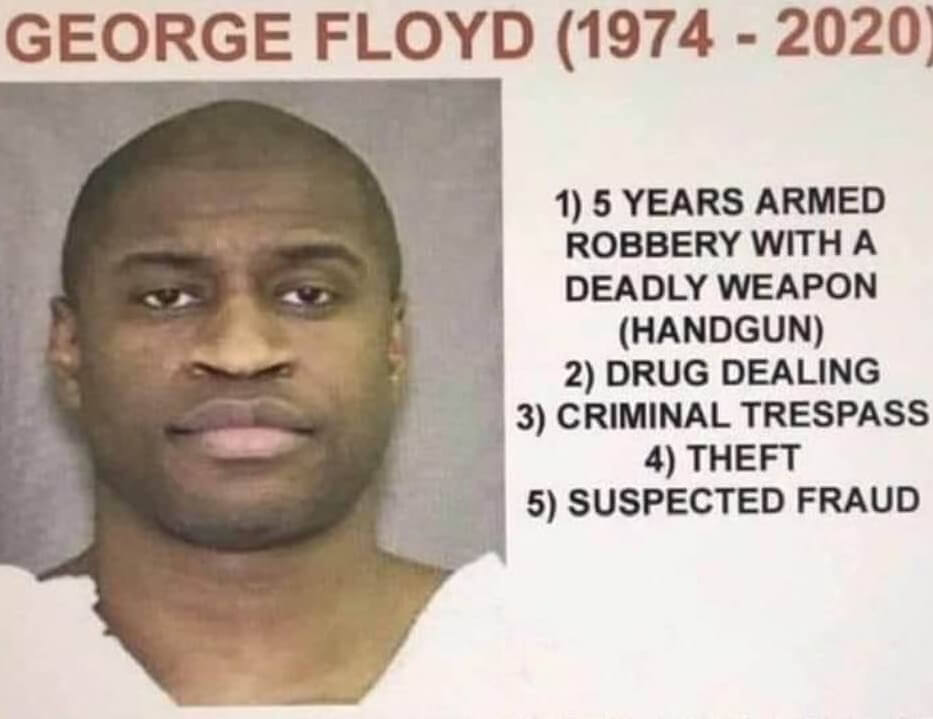 Death “caused by the police subdual and restraint in the setting of severe hypertensive atherosclerotic cardiovascular disease, and methamphetamine, and fentanyl intoxication.”

One side says Floyd died from congestive heart failure, exacerbated by Fentanyl / Meth, causing the blood-tinged sputum to come out of his mouth and nose. The family says not so fast, and it’s all about racism. During Floyd’s recent criminal trial against Floyd, tapes at the liquor store substantiate the liquor store clerk’s testimony that decedent Floyd was “wasted” and VIOLENT.

Floyd was clearly high as a kite and already exhibiting the symptoms of a fatal drug overdose. That is one of the cores of the problem. We have a case of a police interaction leading to death and a news media that doesn’t cover both sides of the story. If they do, they risk being shadowbanned by Meta or being removed from the SERPs, as this would not fit the “systemic racism” narrative.

Perhaps it is a homicide or murder, but it was up to a jury to decide, not UCLA graduates fresh out of journalism school. Ultimately, officer Chauvin was convicted and remains behind bars. Had he had more melanin in his skin, most agree this would not have been a story. Still, we have a murder case happening in Minneapolis due to the incident.

And no sense of justice for anyone in sight seems clear. Not for George Floyd’s family, unless you consider the millions they received for their wrongful death settlement without any trial. Not for the family of the police officers. And certainly not for the nation at large, considering no evidence of any racism was ever presented.

We feel like a great, big wound opened up due to the press’s framing and others using many specious, emotion-based arguments lacking evidence that we must overcome somehow. What better way than to review the causes of George Floyd’s death on a fateful night in May 2020?

We can get a semblance of what truly happened by reviewing court records detailing facts from that night, using sunlight as our disinfectant.

Our legal team has reviewed the case. We now present what we know from our traditional perspective. We used our decades of legal expertise to break this info down further.

The events on that May night in Minneapolis are still controversial and include many publicly known aspects, but some don’t. Furthermore, publicly available information has yet to be reported or not buried by the media.

We have also seen the press, especially CNN, promote the idea that Trump supporters and white people generally are committing hate crimes against gays, blacks, and Hispanics.

When it turns out that these stories were fake self-hate crimes, such as with Jesse Smollet, the media falls silent. Even then-Senator Kamala Harris blamed Trump for the phony attack, and she never retracted her statement.

And we don’t see fact-checkers going crazy to fix what they passed off as genuine. After all, it’s not like Meta will add a “fact check label’ to anything that goes against its politics.

This disinformation and informational blackouts created a confusing situation, sparking race riots, trucks running over rioters, protests, and looting across the country. And it all comes back to that night.

Further review of the case reveals that George Floyd may have died that night regardless of what happened with the Police. The reason for this is the large cocktail of drugs inside his system. The Hennepin County Medical Examiner stated that Floyd had a fatal level of the opioid fentanyl in his body.

But this Examiner and private examiners hired by George Floyd’s family reached different conclusions using the same six pieces of evidence filed in the local court.

As with global warming, or anything else, each side pays experts to give their opinion. If you sell solar panels, you declare the word will end unless you hear my expert and do away with oil drilling. The oil industry has its experts saying we need the energy to survive. Whoever the press gives better coverage wins with the public; here is the jury.

The County Medical Examiner, Dr. Andrew Baker, stated in his report that the autopsy revealed

“no physical evidence suggesting that Mr. Floyd died of asphyxiation.”

The Examiner also noted the inclusion of fentanyl and meth in his bloodstream.

“caused by the police subdual and restraint in the setting of severe hypertensive atherosclerotic cardiovascular disease, and methamphetamine, and fentanyl intoxication.”

In other words, the expert the family paid says Chauvin killed Floyd, and the one hired by the government says it was drugs.

Chauvin personally knew Floyd, who worked as a bouncer with Chauvin at a nightclub. So he knew Floyd was a violent, convicted felon. Chauvin was trained to recognize drug use symptoms and how PCP and meth give suspects the power to break handcuffs with superhuman strength.

Chauvin was videotaped by bystanders pressing his knee down onto Floyd’s neck to keep him down, as the larger, more powerful Floyd was delusional and wasted on heavy-duty drugs.

This info hasn’t hit much of the mainstream press yet. Even with the trial, the insinuative narrative this was a racist attack and cops hate black people remains the focus. Most news coverage centers on “I can’t breathe,” which journalists quoted Floyd as stating during his arrest.

But as we learned in law school, there is often much more involved in the story. Floyd said, “I can’t breathe,” well before he was cuffed and restrained based on the evidence presented during Chauvin’s criminal trial.

What Will The Effects Be?

Whether officials care about the truth matters not; since the narrative does not fit mainstream corporate news agendas, we know many implications remain for resolution here. And our current political and social climate means no explanation will come– or indeed anytime soon.

But we should spread the truth of what happened that night far and wide and not just cave to the tiny, politically driven part of a much broader media narrative. Instead, we citizens must look at the death of George Floyd to give his memory a greater chance for justice, including for his family– and our country.

We are too divided to keep treading along the same lines repeatedly. The exact details of that night should be our jumping-off point into the state of policing. And experts must continually research our understanding of race issues in this country to give updates as we learn more.

I decided to research George Floyd’s death and our nation’s implication and legal issue. It certainly will not go away quickly or anytime soon concerning this large.

Look for riots, fewer police patrols, and hate crimes against white people if officer Chauvin is acquitted. And don’t forget, the Police have zero Constitutional duty to protect you. You must be careful if you consider exercising your right of self-defense by using your car to run against human obstacles blocking roads, or using a firearm, for example! But with the press feeding ordinary people false narratives and fact-checkers refusing to provide unbiased information, expect more future racial polarization used as a political bludgeon.

Check out our most recent wrongful death law blog posts about the famous, infamous and everyday people wounded by at fault parties around the world.