Since multiple UFC fights are scheduled for June and July 2022, we feel that it is the right time to talk about a story involving a UFC fighter that left the state of California in complete shock. On August 12, 2021, a devastating accident became big news as it involved the former UFC fighter, Brendan Schaub. 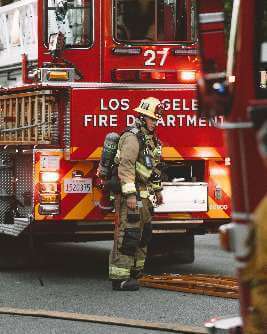 Receive a Free Consultation Today! At Ehline Law, our injury attorneys like to explore legal issues and create awareness of what is going on in America. This article will go over the incident that led to this horrific accident and the MMA’s Brendan Schaub wrong-way car killing hero story.

The accident occurred at 7 PM on August 12, 2021, and four days later, Brendan Schaub got into all the details of the accident on his “The Fighter and The Kid” podcast. The former UFC fighter, Brendan Schaub, said he was heading to a restaurant with his spouse, Joanna Zanella, in Encino, California. On his way, he saw a tractor-trailer blocking the 101 freeway. As he got his car closer to the scene, Schaub noticed a child waving his hand from the top of a mangled vehicle, a distress call for help.

Schaub immediately drew his spouse’s attention to the horrific car wreck. She suggested he keep driving and let law enforcement authorities take care of the situation. However, Brendan Schaub noticed two more kids inside the crumpled vehicle and immediately went to the vehicle without a second thought. Brendan Schaub got out of his car and told his wife to stay in the vehicle for safety.
Schaub approached the mangled car and saw another guy at the accident scene. Presuming that he may be the tractor driver, Schaub diverted his attention to the severely damaged vehicle. He noticed three kids and one older child who was traumatized by the incident as he kept yelling, “I don’t want to die.”

Reassuring the children that they were safe, Schaub tried to hinge the door open but failed as the crash caused the door to intertwine with the vehicle. Brendan Schaub hurriedly broke the partially broken window and started pulling the kids out.

After getting all the kids out, Brendan Schaub saw something grave in the corner of his eye. He glanced into the front seat and saw the children’s mother behind the wheel, who was already dead from her tragic collision. According to Brendan Schaub, the front seat was thoroughly soaked in blood, and brain matter was everywhere.

Horrified at what he saw, he quickly turned toward the kids, who wanted to look at their mom to see if she was doing okay. Schaub, acting like their big brother, pulled the kids, who were crying for their mother, towards himself to prevent the children from witnessing the gruesome incident.

He mentioned in the podcast that he saw a Mexican man in his tank top with no shoes on fleeing from the accident scene. The man was hit by a Dodge Durango while crossing the freeway.

Brendan Schaub said he tried to hold back his tears during the podcast as he further explained how scary the situation was for him and the children. He mentioned that the SUV had hit the tractor in the gas tank, causing the gas to flood out. Brendan Schaub had his clothes soaked in gas and was afraid of a fire breaking out from spilling gasoline caused by the car crash.

When Brendan was assured that the two women would stay with the kids until the emergency services arrived, Schaub left. Brendan Schaub explained in his podcast why he didn’t wait until first responders arrived. It was because he was afraid of pulling his wife into the situation and didn’t want to stick around as the place was dangerous and highly volatile, with gasoline odor everywhere.

Witnesses at the Crime Scene

Schaub was not the only one at the crime scene. In the podcast, he mentioned another woman, Rita Campos, at the location of the accident. After saying Campos in his podcast, media outlets started to reach out to Campos to understand the story from her point of view.
Campos recalled that she was on her way home from work and was a bit far from a tractor-trailer in front of her. She saw an SUV coming on the wrong side of the freeway, and, to her shock, she saw the SUV slam into the tractor, causing a wrong-way crash. Campos immediately swerved her vehicle and parked it on the road.

She also reported that she saw another woman and Schaub at the accident scene as she got out of her car. She asked Schaub whether he called 911, and in that instance, she heard a “thud” sound. Campos stated that she was 100% certain that she saw a man get hit by a black SUV as he tried to flee by crossing the 101 freeway. Although she could not guarantee whether the man got hit by a Dodge Durango, she saw him get hit, and her statement matched the one Schaub provided in his podcast.

During this time, Schaub was already near the mangled car, and soon Campos followed as he tried to rescue the children. There was another man too, who tried to pry the doors open but failed. Schaub cleared the broken window of the shards of glass and took the kids out. He had handed one of the babies to Campos and the other to the other woman who was also at the accident scene.

Campos stated that Schaub rescued the children within 5 to 6 minutes before leaving. The first responders arrived 10 minutes after Schaub left. Concerned for the kids, she stayed for as long as the officers required her to care for the children.

Campos didn’t shy away from giving all the details possible about the accident to the media. She wanted to help law enforcement as much as possible. Campos recalled a conversation with the oldest child (The “chubby one”) from the accident. She mentioned how the child kept stating, “We don’t have a home anymore,” and that their mother was going to heaven.

The child asked Campos whether they would still go to heaven after the accident. Shaken by the conversation, Campos assured the child that one day he would go to heaven, but today he must remain brave and take care of his family since he was the oldest child.

After the release of his podcast, Schaub faced serious doubts from people on social media about his involvement in the traumatic incident, with some believing that he fabricated the entire story. Most skeptics believe that he left the accident scene without speaking to the authorities; hence there is no proof of him being there.

Some of the skeptics thought that the details provided by Schaub were outrageous. Torres getting hit by a car while crossing the freeway, the gasoline flooding, and how Schaub removed the kids from the mangled car were some of the details that skeptics found hard to believe.

Many skeptics also argued that first responders don’t usually take that much time. However, Campos mentioned in her social media post that there was a massive traffic disruption with four lanes blocked, causing a delay in the first responders’ arrival. She stated that people who were not there did not understand the nature of the situation the two were in.

Schaub and Campos were already taken back by the accident, and seeing another guy nailed by a car as he made his escape, the leaking gasoline, the kids screaming for help, and their dead mother behind the wheel was all surreal. Campos stated that the two did not have the time to think but that all their actions were instantaneous.

The local police started their investigation into the accident to get to the bottom of what happened on the 101 freeway. As the California Highway Patrol gathered evidence, it revealed something horrifying. A 31-year-old man named Cesar Iban Torres drove the wrong way on the 101 freeway with his family in the car with the clear intent of killing them.

He tried to flee the accident scene but got hit by a car. The first responders attempted to take the man into custody for questioning. However, he tried to resist arrest but failed. When ABC7 News contacted Torres’s brother Juan Zavala after the accident, Zavala said that he received a phone call from Torres stating that he had to give his family to God.

The surviving kids reported that their mother, Aimee Garcia, a 26-year-old woman, saved the children. The oldest child, 8-year-old Ceasar, mentioned how his mother tried to take control of the wheel even until the last moment. Angie Fuentes, Aimee Garcia’s aunt, told the media that Cesar was the only witness who could recall what he saw inside the car.

On August 16, 2021, the court charged Cesar Iban Torres with several charges, including murder, four counts of child abuse, and four counts of attempted murder, assault, and resisting arrest. The District Attorney at the time, George Gascón, expressed his grief over the incident, stating that the wrong-way driving collision tore apart the family, leaving four kids moderately injured. The court also set Torres’s bail at $1 million and scheduled his arraignment.

Angie Fuentes set up a GoFundMe campaign to raise money for the mother’s funeral and an apartment for the children to live in. She mentioned in her campaign that Garcia died, leaving behind four beautiful children and needed money to survive; otherwise, they would end up in foster care.

The target for the GoFundme campaign was $30,000, but within a few days, it crossed the $69,000 mark. Even former UFC fighter Brendan Schaub reached out to Angie Fuentes to discuss how he could help and contribute to the cause. Schaub mentioned that he wanted to create a college fund for the children and pay for their mother’s funeral.

Many Americans couldn’t understand how a father could murder his partner and attempt to murder his four children. The story did not make sense until Angie Fuentes disclosed the details of their relationship leading to the car wreck.

Fuentes stated that the couple had met when Garcia was 16 and studying in high school. She mentioned how her niece was a victim of domestic abuse for several years, and when the family would approach her about this situation, Garcia would make light of it and try to avoid the questions. At one point, Garcia ended up in the hospital to get stitches, to which Fuentes expressed her concern about the situation she and the kids were in well before the car wreck.

Fuentes said that although Garcia did not have a mom or a dad, she gave all her kids unconditional love and took them everywhere she went. Fuentes was also infuriated by the ordeal and expressed her desire for Torres to suffer in prison for the rest of his life for causing the car wreck. Fuentes cried while speaking to the media that she was the one who cut Garcia’s umbilical cord, and now she is the one planning her funeral.

Domestic violence can affect the victim and those around them, leading to vehicular homicide, e-car wrecks, and more if you’re a victim of a domestic violence car wreck, let us stand by your side and provide you with the legal protection you need so you can avoid a wrongful death or serious injuries. Contact us at +(833) LETS-SUE and learn about your rights.