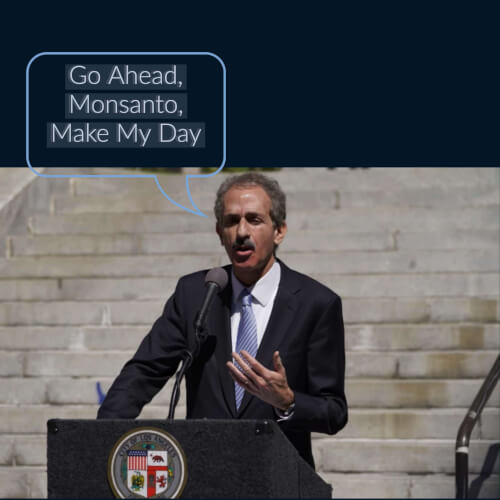 City Attorney Mike Feuer is on the attack again. The Los Angeles City Attorney’s Office proclaimed last Monday that it is suing Bayer AG company’s sister corporation, Monsanto Co., along with its subsidiaries at Pfizer, including Eastman Chemical, in California state superior court.

As many Angelenos know, Monsanto remained one of the most advanced and well-known names in the U.S. during the 20th century for its biochemical and agricultural progress and advancement.

One of my old colleagues I met several times at the City of Los Angeles, City Attorney Mike Feuer, is of the mind that profits over people are evil and that Bayer AG must clean up and pay up for its deception, health risks, and damage to Los Angeles waters and domiciliaries.

For example, certain acts of carelessness or deceptions have the company Monsanto as the target of the City of Los Angeles, whose top prosecutor has alleged the company is using a carcinogen in its products despite knowing the harmful effects of dumping PCBs into Los Angeles water systems.

For its part, Bayer claims:

“Where it has been determined that those cleanups are necessary, federal, and state authorities employ an effective system to identify discharges and allocate clean-up responsibilities. Litigation of the sort brought by the city risks undermining these efforts.”

Also, the time during which the company allegedly was dumping PCBs into Los Angeles waters/L.A. Harbor, the U.S. government, had PCBs listed as “banned” under the Toxic Substances Control Act for causing liver damage risks and other health problems, especially with kids in the United States. Months ago, it appeared it was only a matter of time before Los Angeles City Attorney.

Feuer said in a press conference last Monday that:

“It’s time for Monsanto to clean up and pay up…” “The health and environmental impacts of PCBs – impacts the city has been working hard to reduce in waters throughout L.A…. are just jaw dropping.”

Since Mike Feuer sues Monsanto like this publicly, he must believe he has a strong case. Below, our Los Angeles personal injury attorneys will help residents, visitors, and victims discover why Polychlorinated Biphenyls, or PCBs are so dangerous and why he is acting.

PCB, or polychlorinated biphenyl, is a carcinogen with many harmful effects on human health, both short-term and long-term.

The contamination of waterways from 1935 to 1979 by the company with PCBs was perpetrated when the government banned PCBs. The three companies that were either consolidated or owned by Monsanto caused the contamination.

The names of the accused companies are Pharmacia, Solutia, and Monsanto. It has to be mentioned here that Monsanto was a standalone company at that time but is now owned by Bayer. The EPA had a ban on the usage of PCBs when these companies were using PCBs in manufacturing their products. Some of the products that contained the carcinogen include industrial tools, paper-based products, lubricants of various industrial machines and their hydraulic systems, etc.

The biggest problem is that Monsanto remained the top manufacturer of these products, owning nearly the entire market share.

PCB Contamination and Its Effects

The city is concerned because the company has caused the contamination of all the major lakes and waterways of the county, including but not limited to Santa Monica Bay, Marina Del Rey, Machado Lake, Echo Park Lake, etc. The carcinogen’s presence in these water bodies occurs through the inflow of water brought into these reservoirs through rains and storms.

PCBs are associated with long-term and short-term effects that can be mild to severe. Some less mild effects may include burning in the eyes, awful condition, inflammatory reaction on the skin, reduction in weight, etc.

Short-term exposure can also lead to other stomach-related problems, going from mild diarrhea to severe aches. The other more serious effects of PCB exposure can be behavioral effects on humans, weakness in newborns, behavioral impacts, etc.

Other long-term effects can also include cancer of the thyroid and liver. The fact that the company did not allow its employees in the PCB department to have their meals within the premises of that department is proof it knew all along what PCB was capable of in terms of adverse health effects.

Monsanto Continued the Use of PCBs

The City Attorney believes that the company knew all the damages its use of PCB could cause and continued to deceive the public and authorities into continuing to use it. The company performed the deception through misinformation or by keeping information about the effects hidden completely.

To make matters worse, the company kept it a secret from the city government that all the products manufactured using PCBs would contaminate water bodies too. The carcinogen was used uninhibited in many products used in many sectors and industries.

Monsanto Will Have to Pay?

Mike Feuer, the City Attorney, is very serious about the matter. He believes that the company will have to repay all the damages done to the city due to its use of PCBs in various products. There has been no response from the media teams of the company in the wake of the lawsuit filed by badass Los Angeles City Attorney Mike Feuer.

Bayer, the current owner of Monsanto, has stated they will review the lawsuit. However, Bayer believes it s a meritless lawsuit, saying:

“Monsanto voluntarily ceased its lawful manufacturing of PCBs more than 40 years ago, and never manufactured, used or disposed of PCBs into Los Angeles’ waters, and therefore should not be held liable for the contamination alleged by the city.”

In the meantime, the government authorities in Los Angeles are using filtration, cleaning, and monitoring methods to keep the presence of PCBs in water in check.

We know that Pfizer has been convicted of felony criminal fraud for lying about its drugs’ safety and efficacy.

Here is an example of one of their felony convictions.

“‘The Pharmacia & Upjohn Company – a subsidiary of Pfizer – agreed to plead guilty to a felony violation of the Food, Drug and Cosmetic Act for misbranding the painkiller Bextra ‘with the intent to defraud or mislead,” according to the Department of Justice.”‘ (Source.).

“Pfizer has been ordered to pay $142 million US in damages for fraudulently marketing gabapentin, an anti-seizure drug marketed under the name Neurontin. A federal jury in Boston ruled Thursday that Pfizer fraudulently marketed the drug and promoted it for unapproved uses.” (Source.)

One thing we do know is when L.A. City Attorney Mike Feuer sues Monsanto; he likely already has the goods on this large, powerful organization that has allied itself to known, convicted big pharma felons like Pfizer.

Now that L.A. The city has sued Monsanto; we will see whether they will be held liable or whether the case alleging these defendants are still flooding PCBS into Los Angeles is without merit, as Bayer AG alleges.