Car accident injuries can range from mild to fatal, with an enormous space in between. Unfortunately, even low-speed collisions can cause significant injuries. According to the national Fatality Analysis Reporting System, or FARS, thousands of serious accidents take place each year.

Wrongful death from a car accident occurs when another driver or someone in control of that driver fails to abide by their duty to drive reasonably for the conditions presented and someone you love is killed. It's that simple.

In that case, the wrongful death survivors can sue for their losses of love, companionship, society, and even lack of sexual relations in some cases. Also, you can sue for loss of income and education that would have been provided had the defendant's not killed your husband, wife, child, parents, etc.

The remedy is a civil suit in a court of Unlimited Jurisdiction for money damages. But there are some hurdles and facts you should know before speaking to the other side. These below tips are by attorney Michael Ehline. Hopefully, they will help you out.

What Is The Most Common Cause of Fatal Car Accidents?

At least one study revealed 65,000 fatal vehicle accidents over two years. The study showed that 1 out of 10 driving accidents resulted from driver distraction. And remarkably, a large percentage of driver distraction was drivers lost in wandering thoughts, or from daydreaming.

FARS’ statistics showed that in 2008 alone, 34,017 people died in motor vehicle accidents with others killed each successive year. This article discusses what to do in the aftermath of a car accident fatality.

How Do Fatal Auto Accidents Happen?

Millions of travelers head to work, school, or vacation in their passenger cars every day. Sadly, there are thousands of motoring accidents every year. In fact, every 12 minutes, a fatal car accident takes place somewhere, nationwide.

There are many reasons for these tragedies, including:

Remarkably, only 12% of the total fatalities in recent studies blamed iPhones or Android devices for accidents.

The State of California holds a wrongful death claim as a civil claim, unlike murder. Thus, it is a civil action under tort law. For instance, even unprosecuted criminal cases may be filed as wrongful death actions.

How Do You Sue a Killer - What About Double Jeopardy?

Also, double jeopardy is not at play when comparing a civil and criminal case arising out of the same set of facts. So the D.A. can still jail the evildoer. But that doesn't compensate those left behind for their stacks of bills and sorrow. Picking up the pieces is the hardest part. And without money, it's even harder.

What is The Burden of Proof and Negligence Per Se?

The burden of proof is much lower in a tort action. It will typically be a preponderance of the evidence standard instead of the clear and convincing evidence standard. Conversely, it is not proof beyond a reasonable doubt (as required in criminal cases). (see the below video.)

Hence, generally, your Los Angeles car accident attorney will be unable to argue that the damages were negligence per se. But civil courts allow this type of inferred negligence in, however, when the criminal case convicts the defendant.

No matter what the case, only a trained legal professional can accurately size up each situation. A firm like EhlineLaw.com can build your case brick by brick. Hence, we make sure that we can try to fill the large gap in your life in any way we can.

What Happens After a Fatal Auto Accident?

After such a disaster, the living members of the family could face severe, life-altering issues. Beyond the evident emotional trauma caused, there could be unforeseen issues with insurance companies and their shift tactics. Most of all, insurance claims adjusters and agents try to withhold or reduce your due payments to mere peanuts of their true worth in the marketplace.

Also, large medical bills could be piling up, as you starve while healing and out of work. Most relevant here, the insurance company for the other driver who caused the injury should step up. But fighting a large insurance corporation alone is a daunting task. So what's the answer?

These sneaky and shifty insurance company employees have become cynical dealing with thousands of claims like yours regularly. So they have devised unsavory strategies and policies. All of this is designed to try and keep money from those that need it most. Also, there are other challenges, such as the insurance payout amount, or lack of coverage at all, of the other driver.

Of course, how hard the other side fights will often hinge on how bad you are hurt, and how much coverage remains is available for a payout to those left in the family. In other words, if there is a large amount of money they fight hard to avoid paying. But if there is only $15,000 and you have $500,000 in damages, they will practically beg you to accept the $15,000 policy limits.

Also, beware, insurance companies may seem to care over the phone but this is a scam. They are going to be tightfisted with a smile. Don’t let such a company and its lowlife representatives hold back on your family in your time of need.

Besides, survivors of wrongful death have enough to worry about as it is. Turning it over to a car accident lawyer pro can solve a lot of this mess. Ehline Law Firm has settled similar wrongful death cases with large settlements for victims and their families. Probably it's a good idea to call us for a free, no-pressure consultation. We are standing by today at (213) 596-9642. 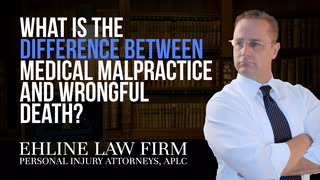