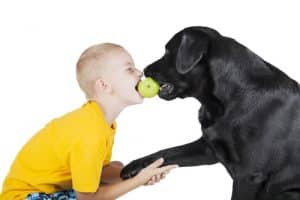 [Content Updated Feb 7, 2021] – Children are new to the new, brave world of dogs and “Landsharks.” Many elders have seen little cruisers playing with dogs as they take water or food from a bowl. And, of course, we have all seen the dog growl or bark in response. So our dog bite lawyers created this page to help solve dog bites and kids’ problems. Our Los Angeles personal injury attorneys will also address the issue of dangerous breeds, or “Landsharks.” Last, we wanted to guide parents needing money for bites, scratches, and killings by dogs.

When you look at statistics, dog bite attacks against children happen more than attacks on adults, and here’s why.

Important: The first people on our list of victims attacked by dogs most are children. As you already know from being young once, children have little to no fear of dogs, often believing every dog is cute, loving, friendly, and approachable. You will find friendly dogs, of course, but you won’t know unless you risk injury or death trying to pet or play with a strange dog, with is a bad move.

So your child may imagine the animal as a docile Golden Retriever that loves playing with kids, having no knowledge if this particular dog is sick with rabies, mistreated by its owner, or previously chased by neighborhood kids. Yes, Fido may seem sweet and well-behaved, but this may not be true in all cases.

CAVEAT: Even friendly dogs should not be around fearful children, as the child or the parent may be attacked due to the smell of fear, alerting the animal to a perceived threat.

Children remain far more susceptible to suffering head trauma like a TBI from being knocked to the ground, puncture wounds, and broken bones. A small dog or a large dog can pierce a child’s thinner skin, causing them immense pain. Parents of dog attack victims will be particularly concerned about how they will pay thousands of dollars in medical bills and cover their missed time from work rushing their children to and from the hospital. Parents will rapidly discover dog wound treatment to a significant pull from familial financial resources, not just emotionally.

Beware – A Child or Parent’s Fear Triggers Dogs to Fight?

Typically a chomped or assaulted child has no idea why the dog went rabid. Of course, dogs can sense fear chemicals because it tells a dog it is about to be attacked.

Because of this, the fear of dogs may remain with these child victims for the rest of their lives. So this newfound fear makes younglings more susceptible to a dog attack as a grown-up. Also, your doctor may suggest psychological care for your child’s new phobia. So the key remains preventing these attacks against children by teaching kids and their caretakers how to stay calm near our furry friends.

Ehline Law Firm’s Southern California lawyers offer advice and information on animal attacks happening to children. Our research shows that each year, millions of people are bitten or assailed by dogs. The Humane Society estimates about 4.7 million individuals in the United States became canine bite victims.

There have been 26 fatalities attributed to dog attacks against adults and minors in the past ten years. As we told you before, most bites involve a dog the victim knows; often, the dog owner or a neighbor gets bitten. The majority of bite incidents happen in or near the home of the victim. Half occur on the dog owner’s property.

Yes, that’s right, statistics show that dogs attack far more kids than, say, an adult. And this may be due to the curious nature of children. Young children may think all dogs are “cute.” As parents, caregivers, guardians, grandparents, or foster parents, we need to know that attacks on children are typically triple those of adults. Because children are lower to the ground, they are closer to the dog’s head and tend to hover close to dogs, often at eye level. Kids like to do dumb stuff too. For example, children may try and play with a dog’s food as it eats, pull its tail and ears, or poke its eyes, and giggle.

Yes, there are certain things we must look out for in a dog’s behavior that can help avoid an altercation altogether. Of course, it’s a big no-no to look a dog in the eye, or play with its food bowl, especially when it is a strange dog in its domicile. Hopefully, the dog will only growl, and that will be enough for your child to disengage. But as a parent, you need to be on the alert and determine the best course of action, considering that the majority of children’s dog injuries are to the face and upper body.

Infants and small kids don’t deserve to face lifelong disfiguring injuries and painful plastique reconstructive surgery. And it’s up to their adult guardians to protect them in the end. Also, most child victims are under the age of 13. And as a parent myself, I want to know why you, as your child’s guardian allowed your child to get so close.

And you better have a good reason. A smart cop or Child Protective Services may think you are an unfit parent, criminally negligent, and perhaps even a murderer.

Unfortunately, there are deaths attributed to dog attacks on unsuspecting kids. Kids can easily suffer a wrongful death, have their voicebox crushed, bleed out, or be suffocated and survive with permanent brain damage. And these are just some possibilities after having a dog’s jaws lockdown on a child’s throat and jugular veins.

About 2/3 Of Dog Attack Deaths Have Been Children

In over two-thirds of dog attack deaths, the victims have been under ten-years-old. The other third comprises children under one year of age and sleeping babies.

What Is a “Landshark,” And Why It Matters To Children?

First, experts may find it easy to point to “dangerous” breeds as a problem. At least one Los Angeles Times reporter coined the term “Landshark” to describe so-called “dangerous dog breeds,” bred to fight.

Bureaucrats love to assume Pit-bulls, Rottweilers, Doberman Pinschers, and Akitas are the problem. Politicians compare these dogs to “assault weapons,” for example. But many small breeds like Pomeranians have harmed children well. So do we ban all dangerous dogs?

Presently, California cities cannot enforce an outright ban on specific breeds of dogs. But many towns have devised creative legislative schemes to make it hard to own certain kinds, like forcing a dog owner to get their animals spayed or neutered. The rational basis for these laws would be making so-called “dangerous dogs” less aggressive.

No amount of dog bite legislation or precautions you take will stop dog bites from frequently occurring, and no dangerous dog breeds exist, just wrong or irresponsible owners.

A Dog Attack Against a Child Can Happen Anywhere, Any Time

Any dog can bite or attack under the right circumstances. Ehline Law Firm knows how to keep your child safe from dog attacks. In our opinion, these guidelines can help make your home accident free. To start, dogs will act more aggressively when in a “pack.” This threat means owners must avoid allowing several dogs (as little as two or more) around children. Also, poorly socialized dogs remain far more likely to attack kids.

Typically, males dogs will bite to show their dominance, but a pregnant dog or one with pups could also attack. Dogs not spayed or neutered are more likely to attack, especially during warmer months, with dog bite risks increasing while people jog, cycle, or walk their dogs in public during sunny weather. More people outside means increased foot traffic, leading to children’s opportunities to interact with approaching, unfamiliar dogs.

Dog Bite Attorneys At Your Service

The dog owner should always keep dogs tethered with a leash, adequately supervising and warning any children who approach to stay away. Dogs should never be chained up inside a yard or remain left unsupervised with kids, ever. Our attorneys think these tips should be an excellent start in achieving child safety around dogs. Remember, you can never protect yourself from an irresponsible dog owner behaving like an abusive foster care parent. You can keep your children safe from being attacked by a dog by staying away from bad dog owners.

Still, when you cannot, you must seek help from the experienced dog bite lawyers at Ehline Law by contacting our severe injury lawyers today at (213) 596-9642.