Dog Breed Most Likely to Be Involved in Attacks Against Humans?

Are there aggressive dog breeds? That’s like asking if there are fat people. To date, no accurate study has been done in a controlled environment to answer that question. Everything will be discussed in detail. First of all, not every canine receives specialized breeding as an attack or guard dog. Some dogs are specifically bred for their aggression or strength. Other working dogs are bred for their intelligence and cunning.

In the meantime, the debate rages over whether the dog breed itself creates dangerous dogs, or is it really other factors like an abusive environment or poor training, or all of the above?

I am Los Angeles dog bite lawyer Michael Ehline. I used to train large dogs like Rottweilers, powerful dogs like Pit Bull and Akita, and various guard dogs. I have extensive experience breeding purebred dogs and cats since my youth.

As a child, I was attacked and bitten by a loose, smaller dog breed that was mixed, commonly known as a “mutt.” To help me deal with my fear of dangerous dogs, my father, a two-tour USMC combat vet, decided to embed me with a neighbor who was a dog trainer.

I learned animal behaviors, breeding, and how to take control of an otherwise dangerous dog. As a lawyer, I took my dog education full circle, mastering civil and administrative dog bite law claims.

I have attended hundreds of animal control hearings. I have won dog bite victims millions of dollars in dog bite cases. I am a true expert on animal behavior and dog bites legal claims. I am here today to explain the differing points of view about the most dangerous dog breeds.

While some dogs were historically bred for particular hunting, protective, or herding characteristics, other working dogs, like Pit Bulls, received selective breeding for aggression and resilience. However, all domesticated dogs are the ancestral descendants of wolves and are prone to attack in the right triggering circumstances.

Also, when a man’s best friend faces a new environment, each dog, regardless of breed, reacts differently. Furthermore, being around children or strangers always carries a particular risk. Most dog bite attacks happen to children. Understanding more about each breed and the likelihood of an attack reduces the chances of such an incident.

Besides, it is a valuable resource when deciding which breed to get for your family, especially around infants. Below we list some dog breeds most likely to become involved in biting incidents based on nationwide statistics.

Breed Types and Incidence of Attacks

We must all understand that all dogs will be guarded towards strangers. Context is everything when making blanket statements about one breed being more dangerous than another. Some of these dubious statistics are based on a 20-year study by the Centers for Disease Control on the breeds they consider most likely to attack. Of course, the debate will continue, whether the species or the owner makes dogs attack. The CDC’s fluked study fails to explain their statistical numbers come from little figures.

For example, CDC numbers fail to consider that far more people buy these dogs, so naturally, these dogs are involved in more attacks. Nor does the study show number and type of dogs licensed in each study location. In contrast, we have produced highly detailed records of San Bernardino County dog bites, city by city. We were able to do so using official public records requests.

We discovered that more people license and own German Shepherds, Rotties, etc., than poodles or tiny dogs in many cases. And we also saw that when provoked, smaller dogs like Chihuahuas bite in the same scenarios a more giant canine would. So are there dangerous dog breeds? I personally think any dog can be hazardous. The stronger or swifter the breed, the more dangerous. But let’s explore what the state and insurers say about this.

Why Does The CDC Monitor Dog Attacks?

Nationwide, the CDC studies diseases, namely rabies. Since dogs can have rabies, the CDC study intends not to determine the most dangerous dog breeds. Instead, it listed nationwide dog breeds, hospitalizations, and quarantines for rabies control.

The CDC study did not include dog ownership records for the areas studied, so there is no way of knowing the per capita instances a particular dog breed would likely attack compared to a more assumedly docile creature.

So take it with a grain of salt. Consequently, the CDC study would be no different than saying an Armalite 15 (AR15) sporting rifle is the most dangerous center-fire rifle. After all, it’s the most common configuration of rifle used by police and civilians. Since it’s the most commonly used rifle in the U.S., use in more shootings based on ownership math would follow.

But we could do this all day. You could say that Honda’s are more dangerous than Mercedes because they are in more car accidents. But a Mercedes Benz costs far more than a small Japanese compact, so more Hondas are roaming the roadways. In other words, they will be in far more car crashes based on sheer numbers. Get it? We can play with statistics and figures to make them say what we want.

Because of the defense insurance company and other propaganda, many people now associate dog bites with breed type. Some breeds are allegedly statistically more violent than others, while we assume some others to be virtually harmless. But several studies and surveys exist on this topic. And many ciphers have attempted to find a connection between the extreme nature of some dogs and their breeds.

But use common sense when choosing what and who to believe. Most of all, censors and human statisticians are not always valid methods to achieve figures. Often it could just be a fluke. Some dogs have long hair and are meant for lush forest property. Other dogs have short hair or short legs, like Pugs. People may not want a dog that sheds a lot of fur. Others want a dog that is fun for the kids and known to play gently. All of these can bite and even kill, even Chow Chows.

Keeping in mind the above-discussed variables, JAVMA conducted their study using this data set. But they focused on bite fatalities over 20 years. Their goal was to determine the most dangerous dog breeds according to the most people killed. As imagined, most of the dogs on their list are included in our results. Like the CDC numbers, we have to remember these are the most popular dogs, so more of them will kill when purely looking at the numbers as opposed to purely the dog breed.

None of the studies considered factors like early socialization and training when labeling one among the most dangerous dog breeds. Remember, dogs come from animals with a high prey drive, wolves. So bad behavior must be curbed at a young age, or every dog can be bad. 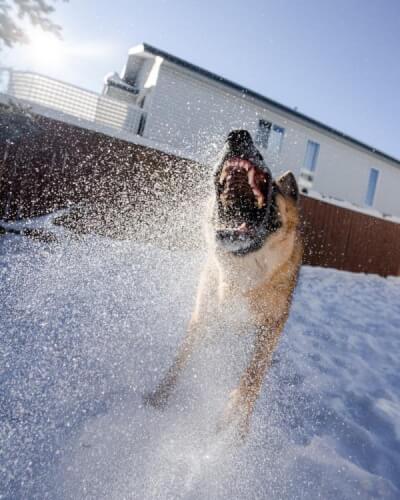 THINKING POINT: Pit Bulls have become very popular in Los Angeles neighborhoods, with its high crime and Draconian gun laws. Their intimidating appearance makes them popular with property owners as a deterrent. So remember, Pit Bulls will be involved in more attacks in the inner city than, say, a less popular dog like an English Fox Hound.

Next, consider that Mastiffs are generally a very large dog breed. So by sheer weight and size, they can accidentally hurt a grown man, let alone a small child or slender female adult. Dog care and training should always be first and foremost when considering the safety of others as a first-time pet owner in particular.

Below are the most commonly owned family pets, and thus considered by many to be the most dangerous breeds, as follows:

This isn’t every supposedly aggressive and dangerous dog breed known to have bitten. But at least you can get an idea about what pet lovers must contend with when considering homeowner’s insurance and renters insurance, as well as public stigma with your landlord and neighbors.

Also, the American Veterinary Medical Association surveyed and completed a study on this matter. Again these are selective information resources without enough foundation to paint a dog as dangerous or not by breed alone.

Following are the dog breeds that AVMA has found to be more frequent biters (See also.) 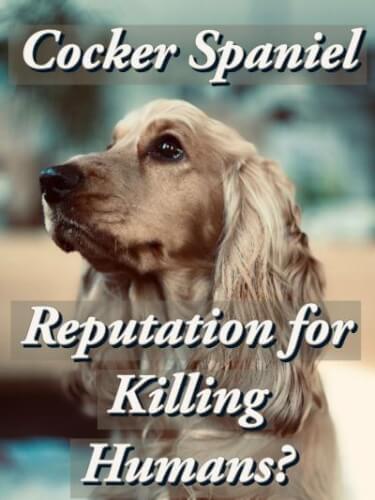 New Cocker Spaniel Owner Tip: Caveat Emptor. (Buyer Beware) The Cocker Spaniel has been involved in over 59 fatal attacks in the last 25 years since the last study. (Banned in the U.K., New Zealand, Denmark, Norway, Hong Kong, Australia, and other countries.)

Additionally, studies conducted by AVMA and the CDC went on for nearly two decades. According to the results, Rottweilers and pit bulls are the dogs most prone to biting. More than 50% of dog bites involved similar dog breeds. The results of both studies were quite similar and relied upon some of the same study materials.

However, the AVMA did not recommend labeling dogs as biters based on their breeds. Aggression in all types of animals is associated with many factors. So a dog’s attack is not necessarily due to its strain.

Unless properly trained at an early age, your species may be labeled as one of the most aggressive dog breeds too. (We have all heard the adage: “you can’t teach an old dog new tricks” for a reason.)

Even though you can train an older dog new tricks, the older they get, the more difficult to train they become. Untrained older dogs tend to be more aggressive, primarily due to their natural prey drive and tendency to act as guard dogs.

My experience has been that the best guard dogs come from parents who already well-trained guard dogs with owners that teach them to be guard dogs at a young age.

Combination of Breed and Circumstances

Dogs come in all sorts of shapes and sizes. Breeds, too. And, of course, temperaments. Family members and protectors value dogs. They are also a point of pride for owners. However, dogs are involved in attacks on people every day.

Some are so severe as to cause severe injury or even death. Not every case is the same, of course.

Furthermore, factors involving the dog and its upbringing are also essential. We delve into significant causes of dog attacks, including ID-ing aggression and the potential for attack avoidance.

Physical Issues that Can Cause Attacks

Contact a medical professional immediately if a dog or a loved one attacks you. Follow this with legal assistance. The Ehline Law Firm, California injury lawyers are here to help anytime. Call or email us for more info. We will meet with you anywhere and offer a free, no-pressure consultation.

Elsewhere on the site, we dissect the causes for each breed’s characteristics. Our Los Angeles headquartered injury attorneys will expand on the stats behind each breed’s attacks and fatalities. Just because a race of animals has a poor reputation does not automatically make it more dangerous and worthy of banishment.

Remember, like a firearm, a dog should always be treated as if it is loaded. Proper canine training saves lives. Ultimately, the owner must be trained well in dog behavior and asserting dominance before taking on a dog into the family. You must decide if the CDC and other study numbers are proof or a fluke.