Insurance Law Attorney Near Me.

From settlement discussions, arbitration, mediation, litigation or trial, we’ll fight the defendants using all available options. Our expertise in interpreting and enforcing insured rights under business and consumer insurance policies helps create an even playing field.

Our Los Angeles injury attorneys’ business is helping you avoid the negative repercussions of an adverse judgment or uncovered loss. Our experienced and aggressive Los Angeles, CA attorneys have won over $150 million on behalf of previous clients.

We value our attorney-client relationship; therefore, we always have satisfied clients. Are you looking for an insurance litigation attorney you can trust in Los Angeles?

We want to hear your story. Contact us at (213) 596-9642 to schedule a free consultation with one of our law firm’s lawyers, who guarantees to fight aggressively for your rights. 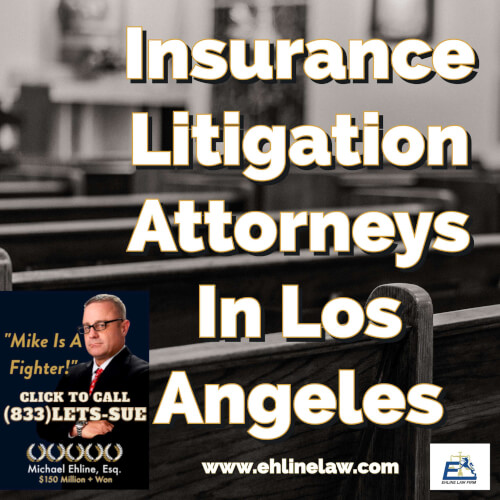 Why Choose Our Honored Partners?

Our proud partners use their recognized leadership in pursuit of justice in connection to your situation. With extensive experience in insurance sales practices litigation arising from point-of-sale disputes. These include rogue agents and commission scams related to annuity suitability litigation.

Why Should You Hire Our Experienced Lawyers for Your Insurance Litigation Settlements?

You may question what distinguishes Ehline Law Firm from other Los Angeles law firms and how we can successfully resolve high-value insurance bad faith claims, considering the time-sensitive information. Clients should choose our experienced attorneys because of:

The Resources We Offer

Our firm has more resources to put back into the business for the benefit of existing and future clients because we effectively take on the most challenging high-value matters. We have a team of litigation attorneys that thoroughly investigate every claim, gathering compelling evidence that other lawyers may overlook.

Additionally, we limit the number of cases we take on so that each of our litigation attorneys and staff members can devote enough time to your case. We devote our time and resources to our clients, and we do not hesitate to pursue a claim to its best potential conclusion, even if that involves going to court.

The Experience Our Litigation Attorneys Possess

You don’t want to call any lawyers that handle insurance law cases when you’re dealing with catastrophic losses caused by insurers’ bad faith. Although many law firms handle a large number of lesser disputes, they are not in a position to seek multimillion-dollar awards or settlements.

Since high-dollar matters are our firm’s emphasis, our litigation lawyers have vast experience managing them. You may rely on us to represent your dispute against your insurer since we have the necessary experience.

Our Reputation in California

Insurers frequently try to take advantage of inexperienced lawyers regarding complex litigation or claims or who do not have a proven track record of success in court. These insurers know they can frighten these lawyers into settling for far less than the client deserves to avoid an expensive trial.

On the other side, our legal team has a track record of success. When we enter the courtroom, insurance firms take us seriously due to our reputation. They are well aware that if an insurer fails to make a favorable settlement, we do not hesitate to take the case to trial.

Additionally, our clients trust us because they know we respect their confidential information and use this only to act in their best interests. Communication is key,, and we ensure that our clients understand everything that happens in their case.

Our Tradition of Success in the Insurance Industry

Regardless of the circumstances, we have discovered insurers’ bad faith conduct and fought for our client’s right to full financial compensation. Our results speak for themselves!

We have obtained multi-million-dollar settlements and verdicts for our clients, including:

Insurance firms are frequently enormous enterprises that prepare to use various defense methods in the event of a bad-faith claim. The goal of an insurance firm is to restrict liability, and these organizations fight aggressively to avoid paying out damages to policyholders. Not every legal office is well-equipped to take on major corporations with a lot of money to spend on defense.

We purchase insurance to protect ourselves, our families, and our businesses against catastrophic occurrences such as natural disasters, fires, motor vehicle accidents, and crippling injuries. When the unexpected occurs, we rely on our insurance coverage to cover our losses, not excuses and contract disputes.

Too regularly, the insurer fails to pay a claim, only agrees to pay a percentage of the claim’s full value. Some of these scofflaws will postpones payment of benefits for several months or years. This conduct helps establish evidence of negligence and proof of bad faith negotiations (it’s just not human!).

Insurance is an incredibly complicated and specialized field of law that can affect anyone from major organizations to homes and small company owners. Underwriting difficulties, questions concerning liability coverage and interpretation of one’s insurance policy, policyholder, and insurance company fulfillment of policy requirements, and, most crucially, the rationality of an insurer’s claim handling and judgments can all form part of insurance-related disputes.

Ehline Law Firm’s insurance coverage and trial lawyers have resolved a broad range of complex insurance litigation cases, including two-party disputes between the insurer and policyholder as well as multiparty issues between multiple insurers.

The insured person’s rights against the insurance company are primarily based on one’s insurance contract as specified in the riders and policy; however, they can also stem from the general obligation of good faith placed by insurance law on all insurance companies in dealing with their clients.

In addition, our legal team knows how to investigate, record, and present contract and bad faith claims against insurance companies.

Since 2005, each year we’ve handled thousands of cases as experienced and aggressive insurance litigation attorneys. Today, we’ll bring your case and follow the same genuine charisma and panache in our actions and deeds.

Regarding policies such as the following practice areas, we defend the insured in coverage disputes working with the insurance company:

Our knowledge regarding insurance law can make all the difference in the outcome of your insurance litigation case, no matter what the circumstances of your insurance coverage issues are or how complicated they become. In reality, our reputation as excellent policyholder advocates might help you get a quick and fair resolution to your denied insurance claim issue in Los Angeles.

Contracts between the insurer and policyholder in Los Angeles include a clause one referred to as the “implied covenant of good faith and fair dealing,” meaning that the insurance company must execute its contractual responsibilities in good faith and cannot unfairly interfere with the policyholder’s contractual rights. These rights include collecting payments for insured risks, conducting a thorough inquiry into the cause of an injury, defending the insurer against third-party claims, and settling any claims in good faith.

However, an insurance firm frequently fails to fulfill its contractual responsibilities. This is often a breach of the covenant of good faith and fair dealing, and the insured can file a lawsuit for insurance bad faith.

The following are examples of acts that one may consider as bad faith:

Any form of insurer or policy can engage in bad faith behavior, including consumer and business coverage. Examining the wording of a policy, which can become highly complex, is the first step in evaluating whether bad faith happened. Even if the policy has unclear language, you may win a bad faith claim if the policyholder has a reasonable expectation of benefits, coverage, or defense, depending on the policy’s terms.

What Damages Can an Individual Member or Large Corporations Seek from an Insurance Company?

Bad faith on the part of an insurer can result in significant losses, such as:

How Do You Recover Punitive Damages?

When insurance firms act in bad faith, people know that the courts, including the Supreme Court, order them to pay punitive damages. Punitive damages are not based on any particular financial losses suffered by plaintiffs. Instead, if the insurance company commits serious malfeasance, a jury may award punitive damages to the plaintiff as an additional punishment.

Punitive damages may add millions of dollars to the value of a claim; however, defense insurers would vehemently that such an amount gets warranted. The best lawyers in Los Angeles are well-versed in the legislation governing the possibility of punitive damages and can determine when it is proper and to pursue them.

In insurer bad faith disputes, we have achieved jury awards of millions for many businesses or individuals. We constantly explore these damages in each case to ensure that our clients receive justice, whether for life insurance or premise liability insurance regarding large companies.

How Do You Resolve Insurance Coverage Issues in Los Angeles?

The trial lawyers at Ehline Law Firm know how to analyze insurance policies and are well-versed in California’s extensive insurance law and case law, statutes, and regulatory compliance.

When a prospective challenger points out mistakes in policy interpretation, the insurer’s ignorance of the law, or the facts supporting the claim, insurance companies who denied policyholders’ benefits frequently reconsider their decision.

Ehline Law Firm recognizes the need to first consult with the insurance business to see if they can rectify the problems resulting in claim denial. The best lawyers have the experience to fight an insurance team and win the insurance case at trial if the insurer’s unlawful deprivation of the claim cannot get addressed satisfactorily.

How Do Policyholders Win Complex Cases in Court?

The best law firms have extensive expertise fighting coverage and claim management issues at the summary judgment stage and presenting insurance claims in front of juries, allowing them to defeat the largest insurance companies and compete for law firms.

In the quest for benefits that were unfairly denied, the friendly and charismatic attorneys from Ehline Law Firm have previously represented individual policyholders and business owners.

Insurance coverage is in place to protect your organization and its employees; however, if there are any insurance coverage concerns with large insurers, we assist you in enforcing your specific policy terms. Insurance companies may deny claims from corporate policyholders, just as they can for individual policyholders. This denied claim may be costly in terms of outside costs and potential liability connected to fighting the underlying denied claim.

We emphasize communication between the attorney managing your case and in-house counsel supervising representation because our insurance litigation attorneys advocate for companies and people.

Ehline Law Firm clients have benefited from our experience at all stages of a company’s development for decades. Your company is our company, and we know how to deal with insurance providers to your advantage.

Allowing the insurer’s justification for denying coverage on a complex litigation claim or liability risk to be the last word on your rights is a mistake. Contact the civil trial lawyers at Ehline Law Firm to discuss your options.

Call us at (213) 596-9642 for more information or fill in the online consultation form on our website to schedule your free case evaluation in Northern or Southern California.