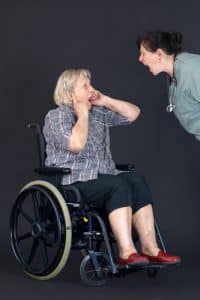 What Are Some Recent Case Studies?

The National Center for the Protection of Older People at the University College Dublin found in their research that over one in four employees had witnessed psychological abuse. This kind of ill-treatment includes shouting, swearing, or insulting the elderly resident at a nursing home.

And this is heinous enough, but to make elderly nursing home abuse even worse, one in eight employees had witnessed residents’ physical abuse. So this involves pushing, shoving, pinching, grabbing, or unnecessarily restraining residents.

This in-depth study covered over 1300 nurses and healthcare assistants from 64 nursing homes. The study’s research data showed physical and mental abuse was not the only crime. Also, 1.2% of staff members were seen by other employees stealing residents’ valuables.

Many nursing abuse law firms argued in court that elders are susceptible to being scammed. At least one recent study that the University of California conducted in Los Angeles supports this argument. It focused on the brain of the elderly and found significant differences in the critical areas compared to younger patients.

They found that when showing the two groups a series of photographs, with individuals who appeared trustworthy and others with a shifty appearance, there was a tremendous difference in reactions in both groups’ brains.

Further, an MRI testing showed that the brain’s part known as the anterior insula in older participants lacked activity. For the younger participants, there was a flurry of activity.

So this makes you feel ill at ease or stressepickcks up behaviors and helps you make difficult decisions.

This gullibility puts them at risk can:

What are Some Recent Cases of Abuse?

Recently, two nurses were held responsible for felony elder abuse of a nursing home resident who succumbed to the lack of proper care. One staff member was a registered nurse and nursing director at the now-defunct El Dorado Care Center.

This now-closed location is where the alleged abuse occurred. When the resident was hospitalized, the ER documented injuries other than hospital admissions reported, including bruises and her wounded pinky finger.

In civil court, the elder abuse victim’s husband, as a part of his lawsuit, claimed the nursing home was understaffed to maximize profits.

What About The Unreported Abuse?

These nursing home employees were held accountable in the above cases. However, there are thousands of nursing home abuse cases, with what is believed to be approximately half or more never reported to authorities. This silence is because, in most cases, the nursing home resident feels defenseless.

They do not believe they have an avenue to stop the mistreatment, so they live in fear of the abuse. And this is what the nursing home staff member, who won’t give proper care, counts on. Often the elder abuse only comes to light because of the family members who recognize the signs!

So they are forced to go to the authorities and perhaps an elder abuse lawyer. But what about the elder without immediate family or friends to raise the alarm? What do they do? Where is the oversight? Lobbying Sacramento is one way to help reel in the mistreatment. But civility and empathy are the only ways to end our seniors’ harm.

There is a lot to this. Of course, there are many excellent care providers. But all it takes is one weak link in the chain, and the whole house of cards comes tumbling down.

Be forever vigilant about the abuse of seniors. An elderly law abuse attorney can help even some of the odds, as noted above. If you need help with an elderly abuse law question, use our online contact form, or call Ehline Law Firm Personal Injury Attorneys, APLC, at (213) 596-9642.