Were you or a loved one seriously injured or killed in a Los Angeles train accident? Our very best train accident lawyer, Michael Ehline, has aggressively helped victims with various Southern California train accident cases since 2005.

For over 30 combined years, our team of highly experienced Los Angeles train accident attorneys at Ehline Law Firm has provided superior legal representation for all types of high-cost railroad accidents.

Train accident victims already know at-fault culprits might include Los Angeles Metrolink/Metro Rail, the railroad industry, other government agencies like the City and County of Los Angeles, or a quasi-private party operator like Amtrak. We’ve recovered millions of dollars.

This means how, when, and the community where people make a train crash claim will vastly differ. You’ll need the most experienced train accident lawyers in Los Angeles to handle the details, assuring the legal requirements are met. Our compassionate, superior client representation helps get you paid a full and fair recovery, or we get paid nothing.

Any person can be a train accident victim. Families face many daunting challenges and not just the passenger. A car accident at a railroad crossing can involve one or more insurance companies, the State of California, and a Federal Railroad Administration investigation.

After suffering a severe injury or wrongful death of a loved one, the surviving victims will be grieving and facing monumental losses. Train accident lawyers can act as an emissary for their clients, insurance companies, and government agencies.

Ehline’s staff of railroad injury lawyers have the experience and expertise needed to fight for your rights. Our railroad accident-injury attorneys understand railroad law and varying degrees of liability. We provide top-level legal counsel and representation for passengers, victims, and bystanders struck by vehicles.

Why Should I Retain Ehline Firm For A Train Crash?

When you’re injured, you need to talk to our Los Angeles attorneys. Our team members answer your questions and handle everything with personal attention. We let you recover during the information evaluation process.

Our office has represented thousands of clients across the country injured on railways. Our firm has dealt with government laws about injuries sustained while riding navigating or circumstances like falling into a gap around rail cars.

What Should I Expect From Ehline’s Top Los Angeles Train Accident Attorney?

Yes, it does! Rolling up our sleeves as soon as we take your case makes our action better. There are many layers to unravel when someone gets injured in a train crash. We don’t let our mission get lost in translation.

The clients’ goal remains to obtain the maximum compensation number.

To get the best results, our offices will immediately gather essential information, including:

This way, our lawyers can identify each fact and every one bearing responsibility for their part in causing deaths or your disaster.

As common carriers, railroad companies have a higher responsibility to safely transport the public by taking all necessary safety precautions.

These wrongdoers may be liable for everything, or more than a portion of the outcome:

A private or public railway operator (Ex: Crossing arm is not working, a warning signal fails to sound the alarm). Maintenance crews must remove objects/debris from tracks and grounds.

In addition, an array of defendants may exist, liable to help pay you compensation through verdicts or settlements. Not every organization involved will have an insurer. It could be government workers or a private business with self-insurance or a bond. 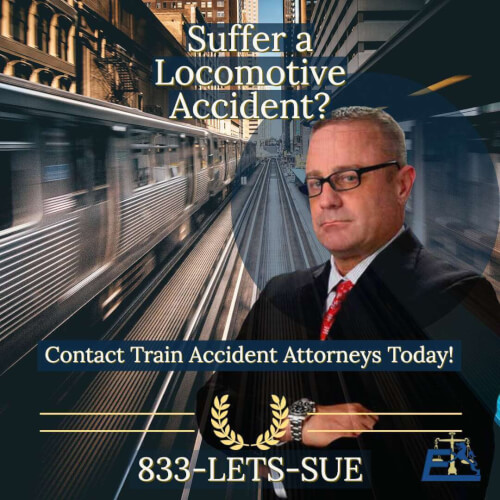 Trains are the most reliable and affordable form of public transportation worldwide. In 2013, 80 people died in Spain, and scores more injured in a widely reported wreck. Remember the Los Angeles, CA Chatsworth crash? Engineers have made vast improvements to railway technologies since then. However, collisions remain high despite their mission and best efforts.

Every 90 minutes, an accident or injury on tracks happens in the United States. Los Angeles, CA, has seen fatalities increase over the past ten years and 50% higher ridership.

What Are The Most Common Accident Cases Our Office Takes?

Some fundamental causes of train accidents and injuries include:

In Los Angeles, CA, these failures can create a hazardous result for people.

As a transportation law firm, we offer free consultations to discuss all elements of your Los Angeles, CA case. Our years of experience will be displayed when clients need representation for any road crash with pedestrians, cars, conductors, or others.

As railway safety advocates, Ehline Law Firm is dedicated to ensuring that train cars are safe for your family or your friend at any location. We’ll use best practices for Metrolink Train security in all matters.

Trains, including Metrolink, are large and heavy, travel at high speeds, and have large stopping distances.

They can cause individuals:

Fortunately, train and Metrolink accidents are not very common in major urban areas, but they impact lives. Because of the number of passengers on board, Metrolink train or another train company like Amtrak will invariably see more casualties than Union Pacific train crashes.

Damages in a Train Crash/Metrolink Case?

When someone is hurt in an LA train accident, our dedicated legal team works on recovering all possible damages while advocating for the patient’s rights.

We seek recovery of financial losses, called damages. This is broken down into general damages for pain and suffering and special damages for out-of-pocket and other economic losses.

How Much Money Can I Get For My Metrolink Or Other Accident?

How much money you get will be based upon various factors.

Like anyone, your status as a train passenger or regular car accident victim plays a role. For example, more settlement leverage exists with passengers, as they are owed the highest duty of care. But car accidents may involve high insurance coverages with a varying degree of duties. Our Los Angeles car accident lawyers are ready to help. Make the call, we’ll do it all (213) 596-9642.

Can Workers Recover Under FELA?

Employees are eligible to recover damages under FELA for:

“Death or personal injury resulting from a grade crossing accident, on-duty illness contracted in the course of employment, or an occupational disease contracted within two (2) years after the date last exposed.”

Lack of train crash experience in FELA remains the bane of most so-called experts, despite their attorney advertising.

Wounded employees must obtain the services of a firm and staff with a proven track record of success winning streetcar line suits. Our traumatic derailment law firm will work to explore your legal remedies after all commuter train accidents.

What A Los Angeles Train Accident Lawyer Must Prove

An injured railway worker must prove their boss caused their injuries and could have prevented them. This means justice may hinge on what happened. Your safe bet is hiring a top-notch Metrolink train attorney by calling (213) 596-9642.

We can file your injury lawsuit against the following classes and railroad companies:

We will help you determine financial losses, including income, medical expenses, and occupational rehabilitation.

What Is the Train Accident Statute of Limitations in California?

Statutes allow less than two years to file a lawsuit for trains depending on the defendants. Your lawyer must give written notice to public transportation agencies within six months. Get a lawyer in Ontario, Glendale, Santa Monica, San Bernardino, Long Beach, or Orange County today!

If you are a commuter crash victim, we strongly encourage you to contact us before speaking with an insurance company or making calls other than your doctor. Call us today about your serious injury claim, and receive a free case evaluation. Let our best personal injury lawyer hear your side of the story.

We are available 24/7 anywhere in the State of California to answer train wreck questions during your initial consultation. Get help today by phone at (213) 596-9642. Would you please speak with our catastrophic injury attorneys in the heart of downtown Los Angeles railroad tracks?

Obtain free legal advice with no upfront fees. For streamlined legal services, you or your family can contact us using our convenient website contact page form or text us a message.

What’s The Difference Between a Wrongful Death and a Survival Action?

Why Are Experts Important in Many Personal Injury Claims?

How Can I Reduce My Tort Liability As A Business Owner?