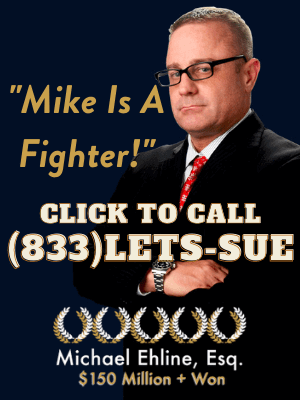 There are two commonly known meanings for sneezing. First, the generic definition of sneezing is a bodily reflex assisting in expelling objects and other foreign bodies from the nose. And next, there is the medical term for sneezing called “sternutation.” This normal bodily function is an irritation response mechanism.

The sneeze is one of many methods the human body uses to prevent and fight infections in the respiratory system and brain. To most people, sneezing while walking, lying in bed watching TV, and even while operating a motorized or another vehicle is not uncommon.

In a sneezing-related auto accident, the victim’s family is often left to deal with the emotional and financial burden of losing time off work for hospital visits. But if you’re the plaintiff, your loss may obtain some relief with a  personal injury lawsuit. At the Los Angeles headquartered Ehline Law Firm, we fight for the rights of families hurt due to a negligent sneeze. We represent those that have lost loved ones due to the negligence of a driver who had a propensity for sneezing and causing an accident. We help sneezing accident victims and others in Los Angeles and across California.

In some instances, when a person sneezes, it is not just a tissue paper-grabbing situation. For example, it may result in excruciating pain in their arms. Sometimes the pain is so unbearable that it can feel like a stroke. In most cases, the pain one endures causes the loss of function of the appendage. Certain people have a known predisposition for this dangerous sneezing condition yet persist in driving. California car crash law limits the amount of time to file a lawsuit. True, the general statute of limitations allows two years or less. But this can be shorter in government claims and other special circumstances. If you think you have a potential claim, promptly speaking with an experienced car accident attorney remains crucial.

Can Sneezing Arm Pain Cause Loss of Control of a Vehicle?

Yes, but not regularly. It seems easy enough to answer this question at first blush, but not really. When one sneezes and suffers arm pain resulting in a temporary period of blocked sensory and control ability, which usually lasts seconds, one wonders if this spontaneous reaction could lead to the loss of a moving vehicle’s supervision. Think of it like this; we look in mirrors, touch knobs, etc. It would appear that even though sneezing can cause some people to be unable to steer, the period of one second is not seemingly significant. But in some situations, it certainly could be, especially if the arm pain lasts any longer than a small second.

To determine if sneezing can place certain people at an increased risk of losing control over their moving vehicles, we must first ask, why does this pain happen at all? Is this a typical reaction, and can anything be done to prevent this pain and subsequent loss of control? The arm pain intensity, location, and time it affects the person can vary, with some people having pain in the shoulders and lower arm and others having pain and numbness in the elbow. For some people, this pain lasts for the length of the sneeze, while for others, it dissipates within seconds. For some individuals, the grief can last for a couple of minutes. For other patients, the pain can go from the arms’ location to the hands and fingers before going away ultimately. Some individuals have pain and tingling in either one or both arms, and in some cases, the pain may happen in the chest area. Pain in the arms and chest remains associated with cardiovascular disease radiating from your shoulder, your neck’s base, and down your fingers. And although pain during or after sneezing is not associated with cardiovascular disease, it exacerbates other body pain responses.

The act of sneezing causes temporary pressure on the spine. So this means neck and spinal problems with the pain traveling through these nerves. And that can result in pain in the shoulders, arms, hands, fingers, and sometimes the chest. Many people notice varying levels of shooting pain in the arms after they sneeze. And after a car accident, for example, when someone is recovering, sneezing can worsen pain between the shoulder blades or increase suffering from a severe back injury. Conversely, people with these post-car crash ailments could suffer from shooting pain when they sneeze but not even know the pain is due to a more severe condition.

In some cases, doctors stop the pain in the arms or shoulder through proper medical treatment for the underlying condition. So treating your pinched nerve or herniated disc may be the answer. Getting a diagnosis from a physician is the first step. And your doctor may ask questions about the location of the pain and how long it lasts after sneezing. The doctor often requests an X-ray of the spinal cord or MRI, identifying the neck or back problem. The physician may recommend physical therapy if the problem is a pinched nerve. Chiropractic treatments and acupuncture may clinically become advised to relieve the condition. Exercise often remains part of the muscle strain recovery process. If the cause is spinal cord inflammation or a back injury, doctors often recommend and prescribe ice, heat, and anti-inflammatory medications for this condition.

Can Sneezing Cause a Car Crash?

The question of whether or not this condition could cause a car accident is plausible. As of yet, we have not located any sources that catalog reports of sneezing and car accidents. Hypothetically speaking, if a person is suffering badly enough from this condition, they could be liable for negligence. But that assumes this situation leads to a pileup or crash on U.S. freeways, tollways, or highways.

Schedule a Free Consultation With A Sneeze Accident Lawyer

Our lawyers have the experience and know-how that are required to bring successful accident claims. Our goal is to obtain compensation for motoring accident victims so that they do not have to be further inconvenienced by their loss. We will engage in tricky and comprehensive insurance settlement negotiations. We will work hard to achieve a fair and just settlement on your behalf. Our attorneys are fully prepared to arbitrate your insurance claim with the insurance company. If we can’t convince the insurance adjuster to pay what you deserve, we will litigate the case in court. We know that the victims often face the emotional test of grieving while knowing that another person who knew they sneezed in a way that could cause a crash was responsible for the wreck. We offer family members empathy and insight to help direct them through this horrific period. Our attorneys will travel to your location 24/7. There is never a charge or fee unless you receive financial or other types of recovery. If you or a loved one suffered injuries due to another’s negligent actions, call us today at (833) LETS-SUE for a free evaluation of your case. To learn more about sneezing and car accidents, contact Ehline Law.

Self-Driving Car Accident: Who Is Liable?