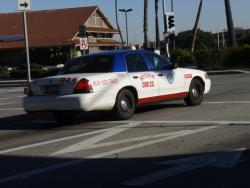 The attorneys at Ehline Law Firm, Personal Injury Attorneys, APLC, have brought you this educational page because we want to prevent more deaths and traffic-related bad luck on Admiralty Way, Marina del Rey, California. Many residents and commuters have seen or heard of severe bicycle spills. Many times a year, people on foot are run over by motor vehicles on Admiralty Way.

Now the Coastal Commission and Cal-trans want to increase the chances of calamity by extending SR 90, so it dumps heavy traffic right onto Mindanao and Admiralty Way. Our firm says no to the SR 90 extension. Read below to learn why.

Have you or someone you know been injured or killed on Admiralty Way or suffered bike injuries to children? If so, you’re not alone. It empties directly onto Admiralty Way, a residential area road!

The SR90 extension plan claimed to be “helping” relieve congestion. But the available facts reveal it will be made things worse for bicyclists, pedestrians, and motorists.

Michael Ehline is an avid bicyclist and has brought you this informational and educational web page. He wants to warn the unsuspecting Marina del Rey resident, recreational bicyclist, and even vacationer that you may need to retain our illustrious legal assistants sooner than you think if the Route 90 expansion is allowed to continue.

Because it is tough to get Admiralty Way accident statistics online, or from the State for that matter, our local law firm has created this user-supported web page. We want to know about your predicament. We’ll post it here online for free so other Marina del Rey residents and vacationers alike can see just how dangerous Admiralty Way is.

Tell us about your disaster case, and help fight the roadway expansion now. The SR90 extension will likely cause more severe injury accidents and wrongful deaths than ever.

And because the government has “design immunity’ available as a defense under the California Government Code, the State may be immune from suit. Fighting the Cal-trans Route 90 expansion plan was so important. But we lost.

Michael Ehline was riding his bicycle that day. So he informed the fire department it was a poorly engineered, blind corner. Ehline also related that he had many close calls as a rider while walking his bike through the same crossing.

In other words, even though Admiralty Way is one of the most dangerous roads on the West Side, the State wants to expand it. That will create a situation whereby more people will be injured and killed on Admiralty Way, Marina del Rey, California.

Nationwide Bicycle Accident Statistics Show How Dangerous the SR90 Extension Will Be to Admiralty Way:

Reckless and Negligent Car Operators Will Only Increase if this goes through—nationwide bicycle contretemps accord with the above local accident statistics for Admiralty Way.

Car operators often wander off mentally and are not paying attention to bicycle operators or people walking around. Car drivers are supposed to treat a bicycle as a motor vehicle. The same laws apply. Dumping significant highway traffic onto Admiralty Way only served to compound these problems.

Cal Trans is working hard to make life more difficult for residents and visitors. Cal-trans and the California Coastal Commission are ramrodding this evil plan down the throats of Marina del Rey residents. (Read the CA Highways Report.) Cal Trans claims the 90 freeway expansion project is to “remove” congestion.

How does Cal Trans think funneling traffic from highway 90 into residential neighborhoods is going to help solve anything? They say extra lanes to allow more traffic and extending a major freeway so it empties into your backyard is the answer. Imagine this. Admiralty Way is now a “freeway” off-ramp.

Our law firm notes that Cal Trans has no online reports showing how this plan will protect Marina del Rey residents. Nor, for that matter, do they explain how artificially increasing available online positive information about this subject is full of conclusions that the SR 90 extension is good.

No Online Reports to Prove Any of the Government’s Assertions

For example, Ca-trans fails to have any engineering reports or expert reports available online that dumping SR90 into residential neighborhoods will decrease congestion. Now, the Mindanao and Admiralty, an SR 90 off-ramp, cause people who would not normally pass through to add to the already horrible traffic.

It will also encourage those taking Lincoln to take a shortcut through Admiralty. So when Lincoln Blvd. is the real problem, with its ancient lane system designed for days of yesteryear, Cal-trans want to carve a path into the beautiful and modern Marina.

The fact that there is no material from any agency online that this plan will help us should raise warning flags. Instead, Cal-Trans has a report that concludes “residential development” requires that highway 90 be dumped into Marina del Rey proper. So, in other words, since Marina del Rey is undergoing development, Cal Trans thought dropping nonresident traffic from the Route 90 highway would somehow “decrease congestion.”

And again, Ca-trans has no feasibility studies, expert reports, safety studies, or accident statistic reduction reports available online. But Cal-trans and other state agencies do have what amounts to propaganda for the SR 90 extension.

It’s your kids, husband, wife, or workers who may get killed by a nonresident driver being dumped into your local area by this absurd Route 90 expansion proposal. Cal-trans should extend Lincoln, a commercial space, rather than a planned community like Marina del Rey.

Adding Bicycle and NOT Car Lanes Will Make the Marina Safer

Perhaps Cal-trans could improve the lighting on Admiralty Way and consider that making bicycle lanes instead of more traffic lanes will save lives. Who has ever complained about gridlock on Admiralty Way?

Instead of increasing traffic and related wrongful deaths by dumping a significant highway onto Admiralty Way, we need to only take into account the substantially changed conditions on Admiralty Way. We need to look at the poorly designed roads on Admiralty Way and fix them.

Many of the locations of crosswalk posts create blind corners for a pedestrian pushing the walk button. And simple things like adding more lighting and relocating traffic posts would help decrease fatalities on Admiralty Way.

Changing the traffic light sequencing from Mindanao and Admiralty at night and in the mornings would allow less traffic. That means less traffic jamming during morning and evening hours. The bottom line is that Lincoln Blvd. needs to be re-done to account for all the 405 freeway traffic that uses Lincoln as a shortcut. Lincoln is too narrow, and there are too many signals.

A: Vote the elected representatives out of office who approve or support the Route 90 highway expansion plan! Support those elected officials who provide SR 90 reports and statistics for our citizen’s review. Express your outrage that the reports available online remain biased. Because they are only based on conclusions and unsupported by online studies or facts, engineering reports, or feasibility studies, they are wrong. Express your disgust with the Route 90 extension. Contact your local elected representative at the Marina del Rey Chamber of Commerce.

Tell Congresswoman Jane Harman, if she supports the Marina del Rey Route 90 expansion, that you don’t support her! (Contact Marina del Rey Representative Jane Harman.) If you or someone you know has been injured or killed on Admiralty Way, Marina del Rey, California, call our free attorney hotline. (888) 400-9721. We will post the facts about your Admiralty Way hard times for free online.

No online expert reports or feasibility studies show how the SR 90 benefits Marina del Rey residents. Besides, we already know the dangers of the Admiralty Way. Adding more traffic lanes increased traffic and failed to help.

A good argument was made for adding more lanes. Making this beautiful city into a freeway traffic off-ramp was a wrong move. Instead, increasing traffic lanes increased traffic from the new freeway off-ramp. It’s right next to your newly remodeled grocery store, Ralph’s! Cal-trans does not have a credible track record on this.

And they compounded the problem. They failed to tackle the Lincoln Blvd. problems. That was a huge mistake. Were you in an SR90 accident and need a Marina SR 90 car crash lawyer? Call us today at (833) LETS-SUE.