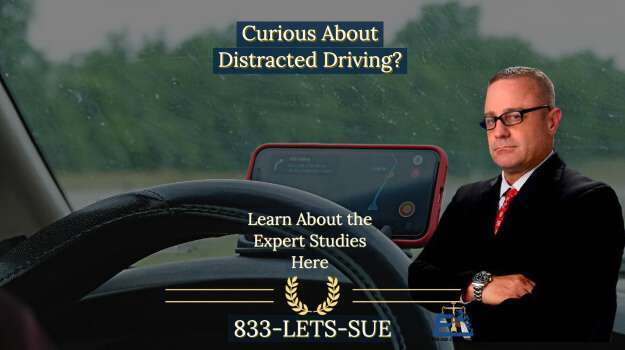 Vulnerable road user safety in C.A. and near-crashes have always been an issue for U.S. citizens, those in Canada, and undocumented aliens alike. Cell phone use, like texting and fatigue, keep many motorists from remaining alert behind the wheel. According to the National Highway Traffic Safety Administration, distracted driving caused 3,142 deaths and 424,000 injuries. Plus, 15% of all police-reported car traffic crashes on U.S. highways in 2019 were tangled with a degree of distraction.

Below, our talented Los Angeles distracted driving attorney covers the secrets of getting paid for a distracted driving accident and the vital facts we may represent for consumers and future personal injury clients. The Virginia Tech Transportation Institute (VTTI) houses nearly 90% of the world’s continuous naturalistic driving data.

VTTI aims to improve transportation safety by reducing distracted driving fatalities resulting from activities prone to diverting attention. These activities include alcohol, drinking, driving, eating, interacting with a cell phone, talking to passengers in the car, adjusting the radio and navigation system, parents scolding the kids, or enjoying entertainment.

Furthermore, the Virginia Tech Transportation Institute has become a member of the newly formed National Distracted Driving Coalition to widen the scope of its research effect to make a difference. The coalition’s purpose is to speed up national efforts to deploy short- and long-term treatments that encourage attentive driving and reduce distracted driving-related injuries and fatalities.

The National Distracted Driving Coalition’s steering committee comprises people from academia, government, and industry who are committed to fostering a culture of reduced driver distraction.

The Virginia Tech Transportation Institute performed a naturalistic driving study in which researchers used radars, sensors, and cameras to track the real-time actions of drivers to determine which distracted driving behaviors and activities mixed with technology are the riskiest and cause the most accidents.

This study’s findings on the effect of a driver’s emotions on their ability to safely drive and traverse streets while moving were among the most startling and exciting discoveries. According to researchers at the Virginia Tech Transportation Institute, drivers who are unhappy, furious, crying, or emotionally distraught have a roughly tenfold increased probability of being involved in a car accident.

According to the AAA Foundation, an electronic device can offer fun or wrongful death. Like females and others applying makeup, smartphones kill. Another finding of this study is that when drivers engage in distracting activities that require them to take their eyes off the road, they more than quadruple their chance of a collision.

Utilizing handheld cell phones, writing, reading, and using touchscreen panels or menus are some of the more typical distracted driving behaviors by motorists. Drivers in the survey described themselves as falling into this category.

According to the findings of this study, ordinary drivers engage in some risky, distracting activity, such as being on their cell phones, for more than half of the time they’re driving. Near crashes shortly, performance errors are sure to follow from the fatigue that goes along with bumper-to-bumper traffic on California’s roadways.

Tom Dingus, the study’s lead author and director of the Virginia Tech Transportation Institute. Dingus says that these findings are crucial because we see a younger population (at greater risk) of drivers, especially teenage drivers, who are more susceptible to engaging in distracting driver behavior and that the report suggests that, if we do not take steps shortly to restrict the number of distracting activities in a car, those who comprise the next generation of drivers are going to be more likely to be involved in distracted driving crashes.

This research is the most comprehensive and largest realistic auto collision database assembled and made available to the general public. Over 1,600 confirmed collisions are included in the database, ranging in severity from minor to major, as well as police-reported collisions.

When researchers looked at the 905 higher severity crashes in the dataset that involved either property damage or injury, they discovered that driver-related variables such as weariness, distraction, impairment, and fatigue were present in over 90% of the 905 higher severity crashes using driving simulator data collection as recent analysis shows.

Tom Dingus mentioned that we have been aware for years that driver-related factors are present in a high percentage of crashes. However, this is the first time people have been able to confidently determine the extent to which these factors contribute to accidents using high-severity, crash-only events totaling more than 900.

The following are some of the most thought-provoking and eye-opening facts and data that this investigation yielded:

Several characteristics previously assumed to enhance driver risk of accident, such as following vehicles too closely or wearing cosmetics, have a reduced prevalence, implying that these factors were either extremely minor or not present at all in the crashes studied. For example, interacting with a youngster in the back seat of a vehicle was revealed to be a lesser risk factor than previously thought.

Driving at speeds more significant than the posted speed limit increases the probability of an accident by 13 times. Driving faults such as inappropriate braking or not being comfortable with the car or roads increase individual risk.

All the components and influences examined and explored in the study were compared to episodes of model driving in which the driver is aware, sober, and attentive. This is the first comparison examination that has been conducted and history researched.

Watch out to increase your odds of safety and achieve your goal of reaching your destination in one piece. VTTI experts have concluded that new drivers are at the most significant risk of being involved in inattentive driving accidents. This is because they are “more likely to engage in high-risk secondary tasks.”

In one of their studies, VTTI researchers looked at 905 injurious and property damage crashes. They found that driver-related issues, such as error, impairment, weariness, and distraction, were responsible for 90% of the accidents.

The researchers were the first to assess crash risk in their distracted driving study. They discovered that tasks that need the driver’s attention to be diverted from the forward roadway considerably increased the likelihood of crash participation.

This applies to drivers of all ages, but particularly teens. Teenagers have a penchant for dividing their attention between a secondary activity and the road straight ahead.

If you have found yourself in an accident due to a distracted driver, contact Ehline Law Firm today to get appropriate legal representation! Our legendary team will schedule a free, confidential appointment to discuss your business privately, risk-free. Our winning lawyers stand by to help you obtain a lucrative damages award. Feel free to use our online contact us form to leave a message for identification purposes, or call us now at (213) 596-9642 today!